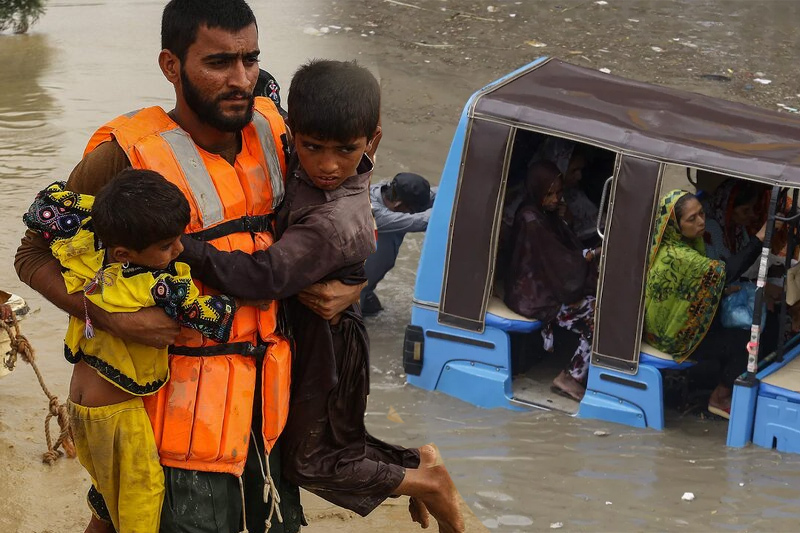 Pakistan has been reeling through one of the most catastrophic floods in decades, displacing millions of people and rendering over one third of the country under water. Now according to a recent study conducted by  World Weather Attribution, a group of scientists have said that the intense rainfall that caused devastating floods in Pakistan were made worse by global warming. “Climate change could have increased the most intense rainfall over a short period in the worst affected areas by about 50 per cent,” according to a study by an international team of climate scientists.

The scientists have further added that such events can be more frequent in future as global temperatures continue to increase. The probability of these flooding events have not been quantified by the scientists. They have however, predicted that there is a 1 per cent chance that such heavy monsoon season can be happen each year in the region.

Friederike Otto, senior lecturer at the Grantham Institute for climate change and the environment at Imperial College London, said that the “fingerprints of global heating could be clearly seen in the Pakistan floods”, as was predicted by scientists. “We can say with high confidence that [the rainfall] would have been less likely to occur without climate change,” she said. “The intensity of the rainfall has increased quite a bit.”

Otto added, “Our evidence suggests that climate change played an important role in the event, although our analysis doesn’t allow us to quantify how big the role was. This is because it is a region with very different weather from one year to another, which makes it hard to see long-term changes in observed data and climate models.”

Though the increased rainfall was worsened by the climate change, the local factors have played a key role as well. Ayesha Siddiqi, assistant professor at the department of geography at Cambridge University, said, “[Flooding] has hit places where local socio-ecological systems were already pretty compromised. This disaster was the result of vulnerability constructed over a number of years, and should not be seen as an outcome of one single event.”