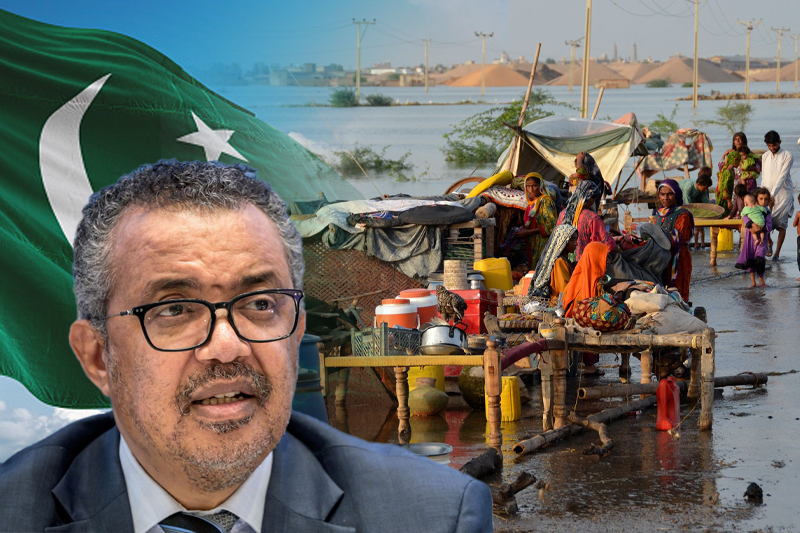 Health officials have warned of massive outbreaks of diseases in Pakistan after catastrophic flooding has displaced millions of people, submerging over a third of the country in water. There has been a surge in cases of diarrhoea and malaria reported after months of heavy rainy season, described as “monsoon on steroid” by United Nations, left scores of people stranded, displaced and without access to clean water.

Authorities have expressed serious concerns over say possible spread of waterborne diseases after the floods, that claimed lives of at least 1,200 people. This situation will further add pressure on already strained health infrastructure in the Asian country. According to World Health Organization, more than 880 clinics have been damaged in the heavy rains and floods. The UN agency has allocated $10m (£8.6m) to emergency health relief efforts towards flood victims in Pakistan.

The floods have been classified as highest levels of emergency by WHO, said Tedros Adhanom Ghebreyesus, director general of the agency on Wednesday. He said the “threat of waterborne diseases meant access to health services and disease monitoring and controls were a key priority”.

Arif Jabbar Khan, director of WaterAid Pakistan, has visited the worst hit Sindh province, where the catastrophic rains began in June. He has noted high risk of diarrhoea and dysentery in the province because of the lack of clean water access. “Families are now living on the banks of overflowed canals and rivers in ramshackle huts made of bamboo and plastic. They have even been drinking flood water because there is no other option – a recipe for large-scale disease outbreaks. We are doing all we can to reach them,” said Khan.

Also Read: Pakistani People Thanks The UAE President For Helping Those Affected By Floods

The floods have contaminated water resources and made the public convenience places inaccessible, risking 33 million to contract water borne and communicable diseases. The UN and Pakistan have urged for global aid of $160 million to provide emergency support to affected 5 million people, the support including food, water, sanitation and shelter.