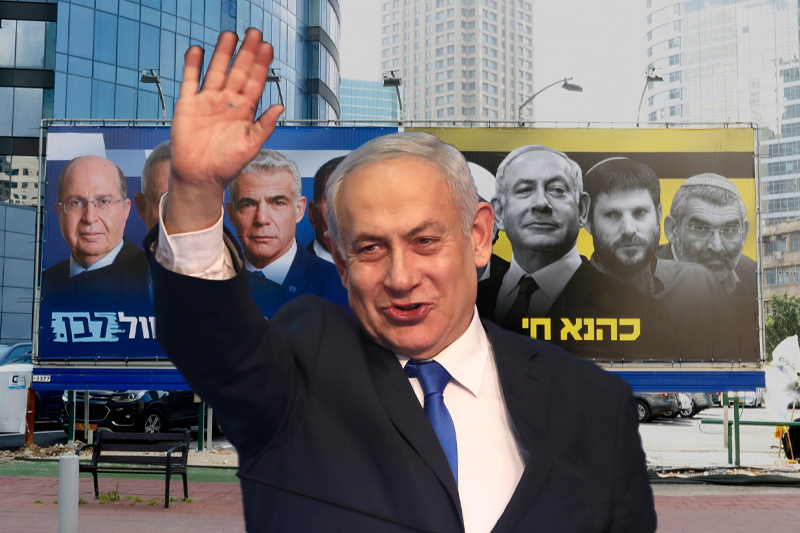 With polls coming in too close to call a day before Israel holds its critical fifth election in four years, a slightest shift in voter turnout can impact former prime minister Benjamin Netanyahu’s attempt for political comeback. The polls have that neither Netanyahu led right wing religious bloc, nor the opposition centre left bloc will have enough seats to form a government.

Surveys by Israel’s public broadcaster Kan, and also Channels 12 and 13, have put the Netanyahu’s right wing bloc, that includes far right extremists and two ultra Orthodox parties at 60 seats, which is one short of a majority in the Knesset of 120 seats. The anti Netanyahu camp, which is led by the incumbent prime minister, Yair Lapid, has been predicted to get hold of 56 seats. Another four seats should go to a pro Arab rights alliance that might or might not support the centre left bloc.

As noted by The Guardian, if the polls are right, Israel’s era of crippling political deadlock will continue, with a sixth election possible in the spring. But if the rightwing bloc keeps slowly gaining, as it has done for the past few weeks, and turnout in the disillusioned 20 per cent of the population with Palestinian heritage is low, Netanyahu may be able to scrape by with a 61st seat. If this does come true, Israel will have the most extremist government in power in its entire history. Netanyahu’s potential coalition partners, the Religious Zionists, which is led by Bezalel Smotrich and the popular Itamar Ben-Gvir, have demanded the dismantling of the independence of the country’s judiciary, which could enable Netanyahu, the former prime minister to beat the charges included in his corruption trial.

“Netanyahu worked actively to bring the far-right and Itamar Ben-Gvir into the mainstream, although I’m not sure he counted on the apprentice overtaking the master,” said Dahlia Scheindlin, a political strategist and pollster who worked as a consultant for the Israeli Labor party. “The other parties weren’t complacent about the threat [the Religious Zionists] pose, but I think there was a general understanding that voters are worn out, and they couldn’t waste resources or exhaust people’s attention too early in the campaigns.”