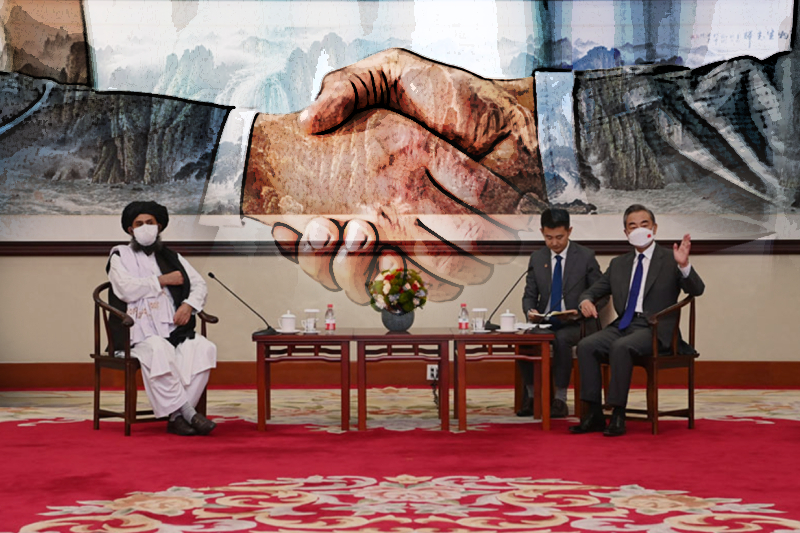 Taliban delegation consisting of nine senior officials of the militant group recently met China’s foreign minister Wang Yi at coastal city of Tianjan. The Chinese diplomat was seen welcoming Taliban’s co-founder and head of its political commission Mullah Abdul Ghani Baradar whole heartedly on Wednesday. The warm welcome by China of the militant group leaders, who are aggravating their offensive in Afghanistan post departure of foreign troops, though is being frowned by the world; USA has called it a hopefully “positive thing”. US Secretary of State Antony Blinken has said that Beijing’s growing interest in Afghanistan can be a good thing for the country.

US and NATO troops are om way to completely withdraw troops from Afghanistan by end of August. This has led to re-emergence of Taliban that is rapidly gaining control of major areas of the country. Wang said that this “marks the failure of the US policy toward Afghanistan”. He also called Taliban “an important military and political force in Afghanistan” and urged the group to progress for peace talks. Taliban too is keen to gain political recognition globally to bolster impact of its victories in Afghanistan.

What does the US think?

United States of America once fiercely resisted any attempts by China to increase its influence in Afghanistan. But now as Biden administration is on verge of complete withdrawal of troops from the country, the priority paradigm has shifted towards avoiding a civil war in Afghanistan. Civil war, at present, seems inevitable with growing Taliban offensive.

Taliban is said to have gained back control of over half of rural Afghanistan since its offensive onset in May. It has also threatened major cities in the country as well as taken control of lucrative border crossings including borders with Pakistan, Iran and Tajikistan.

China shares border with Afghanistan, though only 47 miles long and embedded in Himalayas at 4000 m, covered in snow most of the year. The conditions are averse to transit in this route but China has concerns of Afghanistan becoming base for Uyghur Muslims from western province of Xinjiang in China. Wang said, “East Turkestan Islamic Movement (ETIM) … poses a direct threat to China’s national security and territorial integrity. Combating the ETIM is a common responsibility for the international community”.

Taliban spokesperson Suhail Shaheen has confirmed that Baradar has assured China that “the territory of Afghanistan will not be used against security of any country including China.”

Apart from national security, China also has commercial interests aligned with Taliban. Rich mineral reserves of Afghanistan have been point of interest for China since decades.

Ashraf Ghani, president of Afghanistan has urged the international community to challenge Taliban presenting themselves as a future government. “These are not the Taliban of the 20th century … but the manifestation of the nexus between transnational terrorist networks and transnational criminal organisations,” he said.