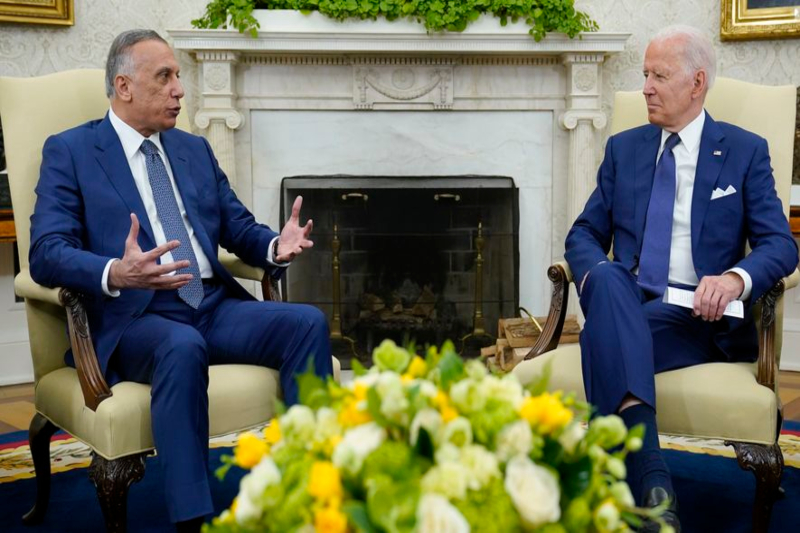 US forces to end combat in Iraq by year end

United States of America President Joe Biden has announced that US combat forces in Iraq are going to end their mission in Iraq by end of this year. The announcement followed Biden’s meeting with Iraqi Prime Minister Mustafa al-Kadhimi at White House. The US troops will however continue to provide advise and train the Iraqi military according to the arrangement.

At present there are 2.500 US troops in Iraq that are helping the forces in country to combat remaining Islamic State group. The number of troops will remain same in Iraq but their active role will end in combat mission – a move likely to help PM Mustafa al- Kadhimi.

Today President Biden met with Prime Minister Mustafa Al-Kadhimi of the Republic of Iraq. Together they discussed initiatives on climate, energy, education, combatting the COVID-19 pandemic, and their commitment to maintaining a strong partnership between the U.S. and Iraq. pic.twitter.com/b06fIOVHu5

Pressure over US presence in Iraq

Qasem Soleimani, the Iranian general and leader of Iran backed Shia Muslim militia, was killed in a US drone attack last year in Baghdad. Since then Iran aligned political parties in Iraq have been pressurizing US forces withdrawal from country. This is despite continuing threat from the Sunni jihadist group in Iraq.

US has meanwhile accused Shia Muslim militia, backed by Iran, of carrying out drone and rocket attacks on Iraqi military bases histing the US led coalition forces. This is attempt to pressurize the forces to leave.

President Biden brings end to another overseas US war

This marks another overseas US war to an end by President Joe Biden. US troops withdrawal from Afghanistan was ordered by Biden. Both wars, in Iraq and Afghanistan, had begun under former President George W Bush. In 2003, US forces had invaded Iraq to eliminate President Saddam Hussein.

In 2011 US forces withdrew, only to return back three years later at Iraqi government request when IS group overran large parts of the country. “Our role in Iraq will be dealing with being available to continue to train, to assist, to help and deal with ISIS as it arrives,” Biden added at the meeting. “But we’re not going to be, by the end of the year, in a combat mission.”

During meeting with Iraqi PM at White House, President Biden said “Our counter-terrorism co-operation will continue even as we shift to this new phase.” Mr Kadhimi responded, “Today our relationship is stronger than ever. Our co-operation is for the economy, the environment, health, education, culture and more.”