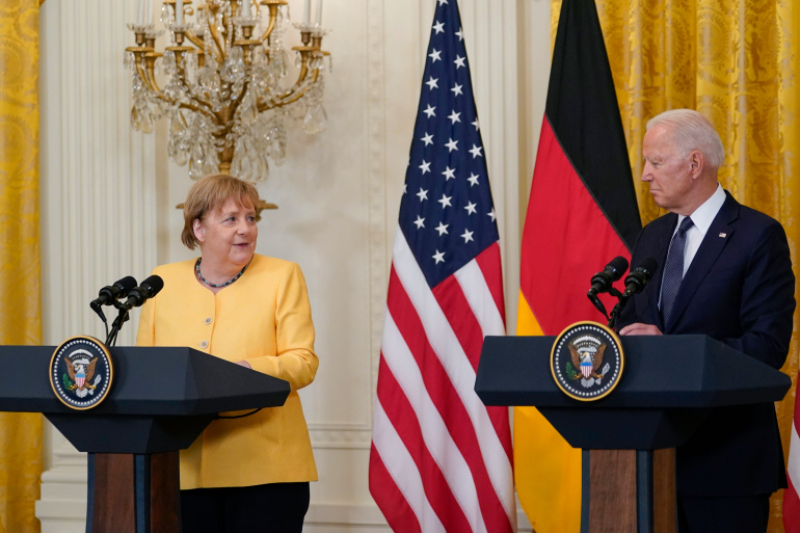 The Biden administration remains true to its word- non confrontative resolution of conflicts. This could be seen when the US decided to shake hands with Germany and calm the turmoil brewing with Russia over the Nord Stream-2 pipeline.

This has also sent off a message that indeed America is moving closer to Germany. But this has also meant that Germany is now open to invest into Ukraine’s green technology infrastructure. This is not the only advantage. The later geopolitical advantage is that Germany and United States can now work together on initiatives to mitigate Russia’s energy dominance in Europe.

The Congress back home isn’t happy with this Biden move. They believe America has let go of leverage over Russia. The latter can easily underplay Washington and strike deals with their European counterparts.

Political advisors in the White House chose relations with Berlin over stalling the nearly completed gas pipeline project. The repeated sanctions would not be able to hold back the project anyway, a tactic that Donald Trump used miserably, without realizing long term repercussions. According to a statement made by Victoria Nuland, the No. 3 official at the US State Department, “We need to help and protect Ukraine. And I feel that we have made some significant steps in that direction with this agreement.”

Safeguarding democracy is far more important than trade, is the mantra of the Biden administration and will see him as a more compassionate leader in times to come. His tactics resonate a lot with the ways of Barack Obama, his predecessor and mentor as well.

On the other side, the Senate Foreign Relations Committee’s top Republican, James E. Risch (Idaho), said he would continue to pursue sanctions legislation in an effort to block the project. America has signed a four-point agreement with Berlin. Ukraine will be circumvented from the gas pipeline project, losing billions. But with Berlin ready to make investments with Ukraine, there a silver lining on the cloud after all.  Under the agreement, Germany will create and administer a $1 billion green technology fund for Ukraine designed to promote renewable energy, facilitate the development of hydrogen and accelerate the country’s transition away from coal, said a senior administration official who spoke on the condition of anonymity to discuss details of the deal. And Germany has also agreed to press for sanctions, in the event Russia attempts to use its energy clout as a weapon against Ukraine, according to the joint statement signed by Washington and Berlin.