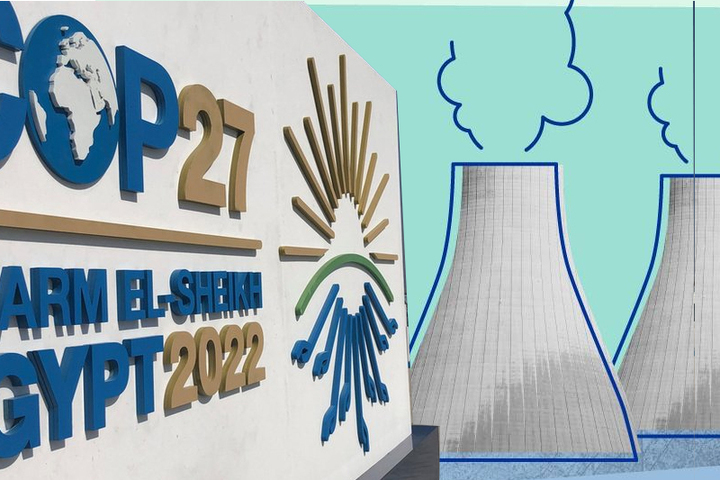 Using the COP27 climate meeting in Egypt, nuclear energy advocates, including politicians and activists, aimed to improve the industry’s image on Wednesday by arguing that atomic power is a safe and cost-effective means to decarbonize the planet.

Some policymakers have a more favorable view of nuclear energy, an industry that has struggled for years to attract investment due to concerns about safety, radioactive waste, and the high cost of building a reactor, as a result of escalating concerns about the rapid pace of climate change and tight global power supplies.

The International Atomic Energy Agency, an intergovernmental agency that promotes nuclear power, inaugurated an exhibit at the United Nations climate summit of world leaders in Egypt – the first time it has done so in 27 years of annual international climate negotiations. The exhibit highlighted the possibilities of the technology in the fight against climate change.

In an interview with Reuters, IAEA Director General Rafael Mariano Grossi stated, “When you speak about nuclear, you speak of a proven energy generator that is not part of the problem, but rather part of the solution.”

“You will see that nuclear energy’s safety record is really robust and consistent,” he added.

During a news conference at the summit on Tuesday, US Special Climate Envoy John Kerry boosted the industry by declaring the US Export-Import Bank’s (EXIM) formal interest in offering $3 billion in financial support for a nuclear project in Romania.

“Nuclear is a feasible alternative…. This is one of the ways we can accomplish net-zero,” he told reporters, referring to the UN goal of achieving net-zero emissions of greenhouse gases by 2050. We cannot achieve net zero by 2050 without nuclear energy.

As part of a broader goal to decarbonize the economy, the United States has already allocated billions of dollars to maintain the operation of existing nuclear power facilities and hopes to stimulate new construction.

Following the 2011 reactor meltdown at the Fukushima power plant in Japan, the nuclear power industry has had difficulty acquiring funds in recent years. This is due to a significant public relations setback. With periodic fighting and power outages at the Zaporizhia plant, Russia’s invasion of Ukraine has prompted additional concerns regarding nuclear safety.

Oleksii Riabchyn, a government advisor for green energy in Ukraine, told Reuters during the meeting that the country’s reactors required a missile shield for protection.

Grossi, of the IAEA, stated that the security issues in Ukraine should not deter nations from constructing nuclear power plants: “The major danger is war, not nuclear energy or any other industrial activity.”

He said that he was in the midst of “very complex” negotiations with Russia and Ukraine regarding a planned no-combat zone around the plant, and he hoped an agreement would be reached soon.

Hannah Fenwick, co-leader of Nuclear for Climate, a network of 150 associations calling for governments to adopt nuclear power, stated that her organization was lobbying policymakers at COP27 to explore nuclear energy investments and was receiving favorable feedback.

“We have been saying for many years that nuclear is a climate solution, and now that the geopolitical atmosphere has shifted, people are listening,” she said.