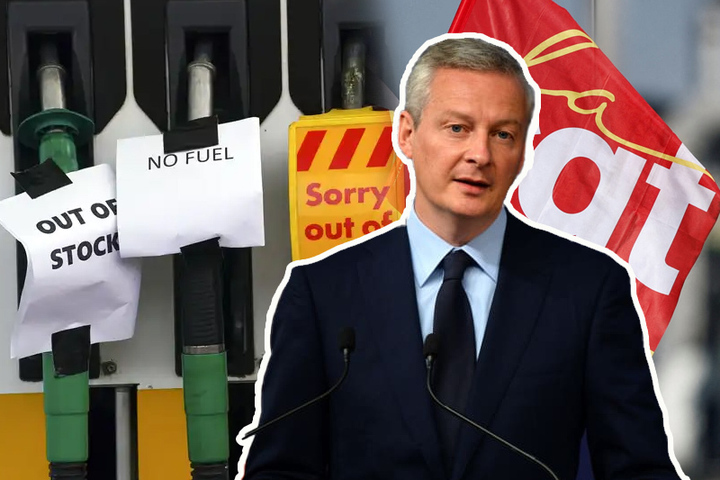 As the fuel crisis drags on, the French minister says time for talk is over

As the fuel crisis drags on, the French minister says time for talk is over

The time for talking is over, French Finance Minister Bruno Le Maire said on Monday, October 17, as the government ordered additional fuel depot employees to return to work in an effort to restore petroleum supplies, which have been hampered for weeks by strikes.

The government announced that it had ordered six employees back to work at a TotalEnergies depot in Dunkirk, northern France, and that it would do the same at its Feyzin depot in the southeast.

On Friday, October 14, the oil company and unions representing the majority of its employees reached a pay agreement that included a 7% increase and a bonus. However, the company was unable to resolve its dispute with the CGT union, which is demanding a 10% pay increase, citing inflation and the company’s enormous profits.

“The time for negotiations is ended,” Le Maire stated on BFM TV, calling it “unacceptable” and “illegitimate” for the CGT to continue its strike for a fourth week after an agreement has been struck.

Monday, according to a CGT official, workers at TotalEnergies’ refineries in Normandie, Donges, La Mede, and Feyzin, as well as the Dunkirk depot, expanded their protest.

The administration has already ordered employees to return to work elsewhere, which the CGT opposes and has called on additional workers to join the protest.

Even so, it will take some time for fuel supplies to return to normal. Minister of Transportation Clement Beaune warned France Inter radio that petrol outlets may continue to experience difficulty until next week.

Energy Minister Agnes Pannier-Runacher told RTL radio that 28.1% of French gas stations were still experiencing supply problems as of 1600 GMT on Monday, compared to 30.0% on Sunday, October 16, a day earlier.

The administration was doing “everything possible” to rectify the situation before the start of the fall school break on Saturday, October 22.

Strikes have spread to other areas of the energy sector, notably the nuclear powerhouse EDF, where vital maintenance work for Europe’s electricity supply will be delayed.

A spokesperson of the FNME-CGT union told Reuters on Monday that strikes were disrupting operations at 10 French nuclear power facilities, with further maintenance delays at 13 reactors and a total reduction of 2,2 gigawatts in French electricity production.

Le Maire stated on Monday that it was crucial for EDF to strike a wage agreement with its unions, adding that an agreement was needed “as soon as feasible.”

He said that the utility, which is in the process of being nationalized in its entirety, was still on schedule with its intentions to complete nuclear repair work before winter.