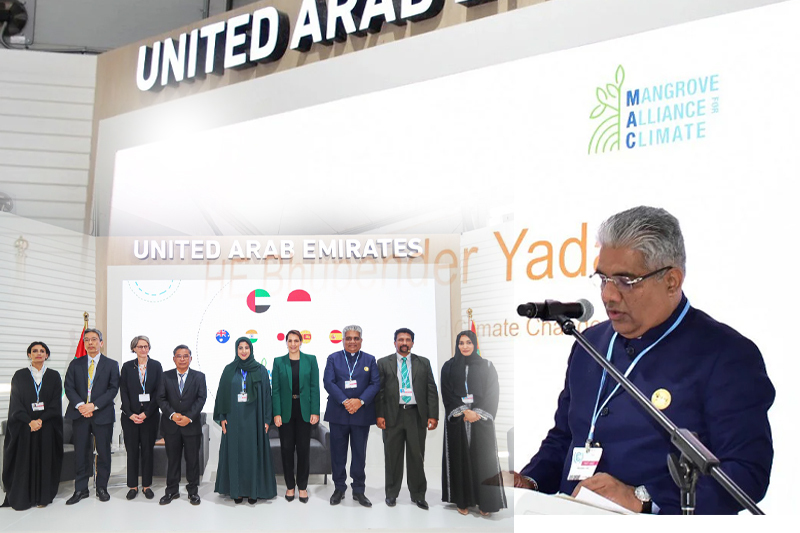 Cop27: What is the UAE led Mangrove Alliance for Climate with India as latest addition?

At the ongoing UN climate summit, Cop27 in Egypt, the Mangrove Alliance for Climate (MAC) was launched, with India becoming latest addition to the alliance. Under the alliance, New Delhi will be collaborating with Sri Lanka, Indonesia and other countries to preserve and restore the region’s mangrove forests that can be critical in global fight against climate change.

Attending the event in Sharm El-Sheikh, Egypt, the Union Minister of India for Environment Forest and Climate Change, Bhupender Yadav said that “India is home to one of the largest remaining areas of mangroves in the world — the Sundarbans — and has years of expertise in restoration of mangrove cover that can be used to aid global measures in this direction.”

Addressed the Mangrove Alliance for Climate Launch on the sidelines of COP27.

Stated that to sustain the blue economy, it is imperative to ensure sustainability of coastal habitats, particularly mangroves for tropical nations, at the local, regional, and international levels. pic.twitter.com/oF4aU7dsPZ

The MAC initiative is being led by the United Arab Emirates (UAE) and Indonesia has India, Sri Lanka, Australia, Japan, and Spain as the other members. The alliance has aim to educate and spread awareness across the world regarding the role of mangroves in reducing the global warming and also stressing on its potential to fight climate change.

Mariam bint Mohammed Almheiri, UAE’s Minister of Climate Change and the Environment, said while launching the alliance that UAE intends to plant 3 million mangroves in the next two months. This is in line with UAE’s COP26 pledge of planting 100 million mangroves by 2030.

At #COP27, we announced the launch of the Mangrove Alliance for Climate (MAC) in partnership with Indonesia 🇮🇩. MAC seeks to scale up and accelerate the conservation and restoration of #mangrove ecosystems for the benefit of communities worldwide 🌳. pic.twitter.com/NWlDTU8TuU

“Increasing reliance on nature-based solutions is an integral element of the UAE’s climate action on the domestic as well as international level, therefore, we seek to expand our mangrove cover,” she said. “We are pleased to launch MAC jointly with Indonesia, and believe it will go a long way in driving collective climate action and rehabilitating blue carbon ecosystems,” she added.

For years, mangroves have been the focus of conservationists. The mangrove forests, that consist of trees and shrub in intertidal water in coastal areas, are host to diverse marine life. They also support a rich food pyramid, with molluscs and algae-filled substrate acting as a breeding ground for small fish, mud crabs and shrimps. They also act as an important carbon stores by holding up to four times the amount of carbon as compared to other forest ecosystems.