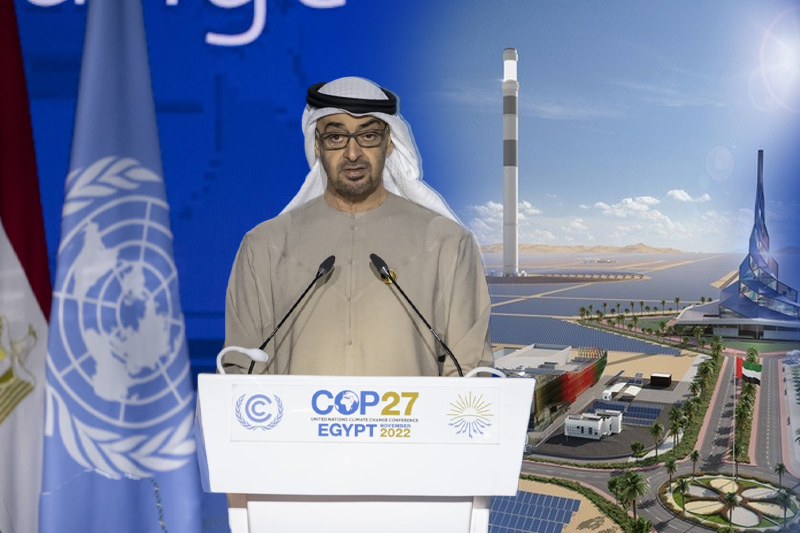 United Arab Emirates, under the leadership of President His Highness Sheikh Mohammed bin Zayed Al Nahyan has bagged a significant share of achievements in the sector of environment protection and action against climate change towards the global goal of reducing carbon emissions as the main cause of climate crisis. The ongoing UN Climate Summit, Cop27 in Egypt has provided an excellent opportunity for UAE, as well as other nations to showcase those achievements and present the initiatives in areas of climate action, energy transition and diplomatic campaigns.

UAE’s achievements in field of environment under President MBZ

Under the leadership of President His Highness Sheikh Mohammed bin Zayed al Nahyan, UAE has announced plans of increasing the number of mangrove trees in country to 100 million by 2030, towards promotion of natural solutions to limit the climate change impact, protect biodiversity and also help to create a natural carbon store.

The UAE is a leading global investor in sector of renewable energy projects. The country has allocated US$100 billion by 2030 for such projects across over 70 countries. The country’s leadership is also empowering communities all over the world to deliver sustainable solutions, through initiatives like Zayed Sustainability Prize.

Abu Dhabi Future Energy Company (Masdar), a pioneer in the field of renewable energy has been launched under leadership of His Highness. At Cop27, Masdar and Egypt’s Infinity joined hands for joint venture Infinity Power Holding and announced operations of the solar photovoltaic (PV) plant it has developed in Sharm El-Sheikh. The plant is now ready to provide clean and renewable energy to Cop27.

Abu Dhabi based Masdar has invested in wind and solar projects across 40 countries. In Egypt, it has launched the new 6-megawatts (MWp) plant that can generate as much as 11,723 megawatt-hours (MWh) of energy per year. This will be enough to power more than 5,000 homes while cutting CO2 emissions by over 4,000 tonnes. As reported by state news agency WAM, the plant will continue to operate after the conference. Dr Sultan bin Ahmed al-Jaber, UAE Minister of Industry and Advanced Technology, Special Envoy for Climate Change and Chairman of Masdar, said: “Masdar is fast developing as the partner of choice for many of Egypt’s most important clean energy projects, and I am proud that we are able to deliver clean energy to support COP27 through our Infinity Power platform. The United Arab Emirates and Egypt share a common commitment to expanding the supply of renewable energy and supporting sustainable economic growth.”

In his address to all attending nations at Cop27, UAE President Sheikh Mohammed bin Zayed al Nahyan made it very clear what the country’s objectives are – to bolster towards key environmental sectors, and to stay in pursuit of attaining carbon neutrality by 2050. “Since we have only one planet, it is important to unify our efforts to tackle this challenge through climate work,” Sheikh Mohamed said, emphasising on the urgency with which all countries must act. Sheikh Mohamed stressed in his remarks, “The UAE’s oil and gas are among the least carbon-intensive in the world. We will continue to reduce emissions in this vital sector.”

I was pleased to attend the COP27 summit and I thank the host nation Egypt for providing this important platform for global collaboration. The UAE is firmly committed to pursuing effective climate action solutions and we look forward to welcoming the world at COP28 next year. pic.twitter.com/yofTBvL9ml

“Our world is facing complex challenges, most important of which is climate change, which now affects the world’s stability and security – including food security. We have only one planet, ladies and gentlemen, and with that in mind, it is imperative that we partner and work together in a spirit of determination and optimism to address this common challenge through climate action,” UAE President added.

At Cop27 in Egypt, UAE has come together with Israel and Jordan and signed deal to advance clean energy and sustainable water desalination projects that were announced last year. The agreement was signed in the presence of Sheikh Abdullah bin Zayed, Minister of Foreign Affairs and International Co-operation; Dr Sultan Al Jaber, Minister of Industry and Advanced Technology and Special Envoy for Climate Change; and John Kerry, the US Special Presidential Envoy for Climate.

The memorandum of understanding is related to Project Prosperity, that includes two components: Prosperity Green and Prosperity Blue. Prosperity Green includes a 600-megawatt solar photovoltaic plant to convert light into electricity. Complemented with electric storage, the plant will be built in Jordan and will produce clean energy for export to Israel. Prosperity Blue is related to sustainable water desalination plant, that will be in Israel and will export 200 million cubic metres of potable water a year to Jordan.