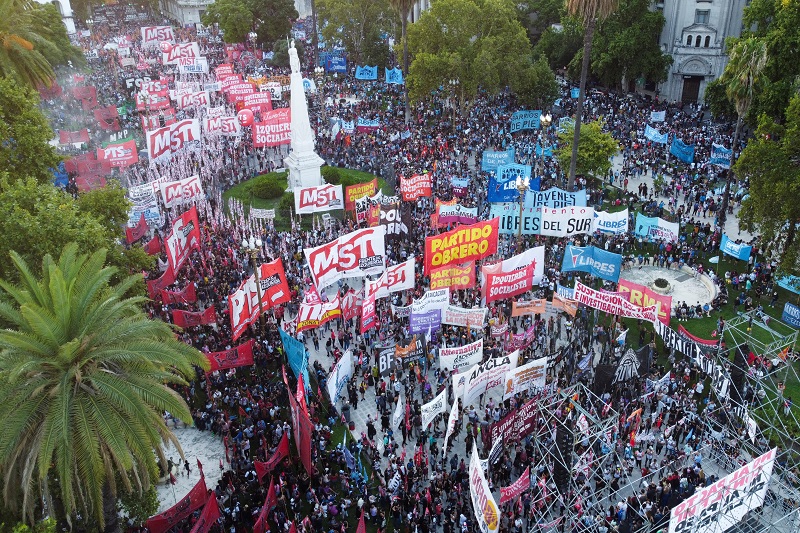 argentines march against the government's agreement with the imf, in buenos aires

On Tuesday, thousands of Argentines took to the streets of Buenos Aires to protest against their government’s likely deal with the International Monetary Fund (IMF).

The protest is seen as a sign of surging tension in the South American nation over the agreement struck late last month.

The likely agreement intends to revamp the $40 billion debt that Argentina cannot pay back.

The protesters marched through the capital holding placards saying “no to an IMF deal” and “no to paying the IMF.”

“They want us to pay with more adjustments. They are taking more out of us. We cannot allow our people to submit to the designs of the IMF,” said a protestor.

A representative for a leftist group in the march, Juan Carlos Giordano, said the debt deal was akin to making the lives of the working class more miserable. He said the funds should be used to move people out of poverty.

“Our aim is to defend wages. We want to defend work and wish that the money goes to combat social ills,” he said.

The IMF and Argentina announced a breakthrough in their deal in late January – restructuring a failed 2018 loan. According to the agreement, debt payments would be pushed back to meet specific economic targets agreed with the international bank.

However, it is pertinent to state that the agreement needs approval from Argentina’s Congress and the IMF board.

“A big no from us to the government’s deal with the IMF,” said a protest leader, wearing a shirt reading “scams are not paid.”

IMF’s Kristalina Georgieva said last week that an agreement with Argentina had been reached in principle; however, “hard work” still lay ahead.

According to media reports, splits appeared in the Peronist coalition over the deal, with one lawmaker stepping down from his seat in Congress in opposition to it.