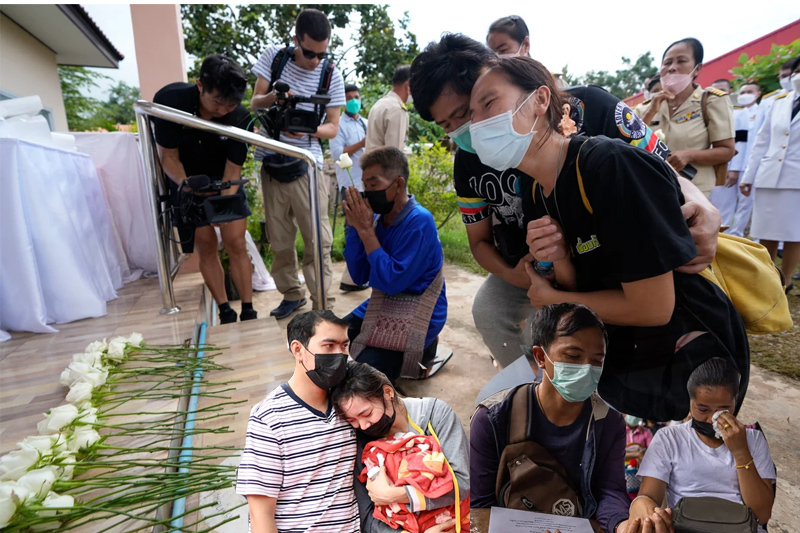 Thailand is shook in horror and grief after 37 people were killed, at least 24 of them being children, in a massacre on Thursday at a child care center in northeastern Thailand. The attack is believed to be the country’s deadliest incident till date. The UN secretary general, António Guterres, said: “I’m profoundly saddened by the heinous shooting at a childcare centre in Thailand. Learning centres should be spaces where children feel safe, never targeted. My condolences to the victims’ loved ones and the people of Thailand.”

Authorities had immediately launched a manhunt for the suspect, who was later identified by Thailand’s Central Investigation Bureau (CIB) as Panya Kamrab, a 34 year old former police officer. According to Thai Royal Police, Kamrab was suspended earlier this year from police duty on drug possession charges. The attacker “opened fire and stabbed children as they slept at the centre in Uthai Sawan, a town 500km (310 miles) north-east of Bangkok at about noon on Thursday”, police and witnesses said. As Kamrab left the nursery, he drove his car towards and shot at bystanders. He then returned home and shot his wife, child and himself.

The Thai government has ordered all Thai flags to be lowered to half mast on Friday. The Thai prime minister, Prayuth Chan-ocha, was expected to visit the area later in the day. “This shouldn’t happen,” he said on Thursday. “I feel deep sadness toward the victims and their relatives.”

The UN Children’s Fund, UNICEF too has condemned the deadly attack. “UNICEF condemns all forms of violence against children. No child should be a target or witness of violence anywhere, anytime”, said a statement released by the agency.

UNICEF is saddened and shocked by the tragic shooting incident at an early childhood development centre in Thailand’s northern province of NongBuaLamphu. UNICEF condemns all forms of violence against children. No child should be a target or witness of violence anywhere, anytime. pic.twitter.com/Vw41DxnZa5

The UN Educational, Scientific and Cultural Organisation, UNESCO, also issued its deepest condolences to the families of the victims. “Attacks on schools, students and educators, are attacks on rights to education”, the agency tweeted. “No-one should be a target.”

The paramedics who reached the scene describe the harrowing view. “It’s a scene that nobody wants to see. From the first step when I went in, it felt harrowing,” Piyalak Kingkaew, an emergency worker heading the first responder team, told Reuters. “We’ve been through it before, but this incident is most harrowing because they are little kids.”