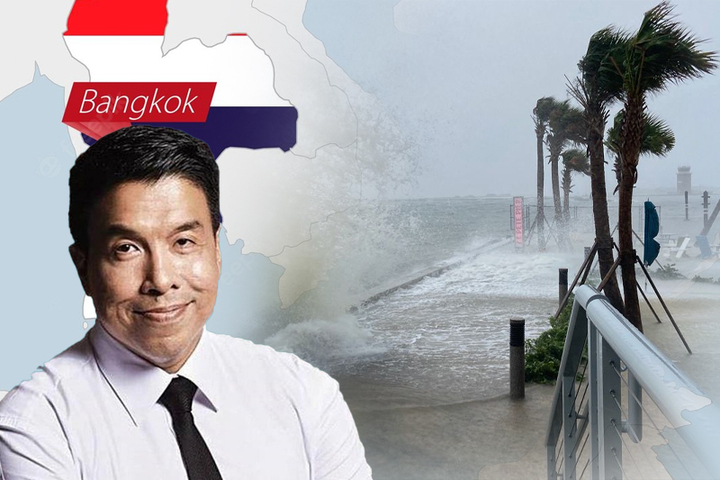 The Bangkok Metropolitan Administration (BMA) has taken measures, such as draining water out of canals in and around the city and procuring 2.5 million sandbags to reinforce flood walls, in order to prepare for heavy rain and the possibility of waterway overflows caused by tropical storm Noru, which is expected to hit some north-eastern provinces on Thursday. The storm is expected to make landfall in some of these provinces.

The Governor of Bangkok, Chadchart Sittipunt, stated today (Monday) that, according to their scenario planning, the most worrisome aspects of the storm are the runoffs from the Pasak reservoir in Lop Buri and from the Chao Phraya reservoir, which will put pressure on the eastern part of Bangkok and both sides of the Chao Phraya River. This information was provided by the Bangkok Governor’s Office.

In order to stop the reservoir from overflowing, the water that runs off from the Pasak reservoir will be evacuated through the Phra Ong Chao Chaiyanuchit and Lam Pla Thio canals.

He stated that the water levels in all of Bangkok’s canals have dropped below the control level, as a result of the Drainage and Sewerage Department’s increased efforts to drain water out of the canals and into the Chao Phraya River. This increased the canals’ capacity to store more water in anticipation of the heavy rain that is expected to fall this week.

The BMA will provide logistical support to riverside communities by supplying them with sandbags and installing additional water pumps, if those measures are required, as the governor has stated that riverside communities have a responsibility to help protect themselves by monitoring the floodwalls in their communities.

He asserts that it is more sensible for individuals in communities to prevent local flooding than than allow them to be inundated, which would require eventual rehabilitation of the affected areas.

Despite the fact that Thailand has not been affected by a tropical storm so far this year, the governor of the province pointed out that the accumulated rainfall in Bangkok for the month of September has so far been measured at 744 millimeters, with 922.5 millimeters being recorded in the Din Daeng district.

According to Chadchart, this is an unmistakable indication of how the climate is changing, and he predicts that the weather will continue to become more severe in the years to come.

In addition to that, he found that Lat Krabang, Bang Khen, Min Buri, and Don Mueang were more susceptible to flooding than the other districts in the capital.