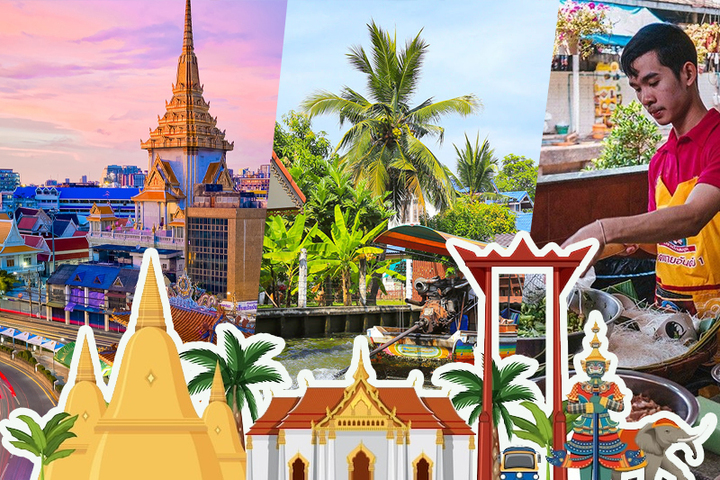 Prior to the pandemic, Thailand was one of the top ten most popular tourist destinations in the world. This tropical nation attracts a large number of vacationers from all over the world due to its unique culture, delectable cuisine, reasonable prices, and breathtaking coastal spots.

Many people start their adventure in Bangkok, which is also known as Krung Thep in the Thai language and is a city that is teeming with life. Over the years, it has attracted a wide variety of travelers, including those who are going on the backpacker banana pancake route as well as those who are paying lavishly.

This bustling metropolis is home to many temples (and more temples), bars (for all types of interests), restaurants, shops, malls, and other attractions that may quickly fill your agenda with things to see and do. As a result of the country relaxing its COVID limitations, it is once again quite anxious to receive tourists. During their time in Bangkok, Filipinos have the option of taking a short journey or going on a more extensive excursion.

Visas are not required for stays of up to 30 days in Thailand for citizens of the Philippines. In Thailand, you are able to submit an application for a visa extension if you intend to remain in the country for a longer period of time.

Getting around the metro

There are a few different ways that you might choose to discover the city. Grab is an option available to you when you are in the city. In addition to this, there are standard taxis that may transport you to the location of your choice. Always ask (or insist) that the driver utilize the meter, because taxi drivers will try to take advantage of visitors, just like they do in Metro Manila. Traveling throughout the city via train is an option that is both convenient and cost-effective. You can get a Rabbit Card for THB200, and you should use it whenever you ride the BTS or any of the other available modes of public transportation. In the event that the load on your card is depleted, you will need to refill it with multiples of THB100 at each subsequent transaction.

Renting a tuk tuk is a fun and interesting way to get about the city. The latter is analogous to a three-wheeled vehicle commonly found in the Philippines. The price of a ride for tourists is typically around 60 Thai Baht, although the cost might rise significantly depending on where you go. You need to pay for each ride, not each individual passenger. Taking a river taxi is another another choice you have. The price of a river taxi ranges from about 10 to 40 Thai Baht, depending on where you get off.

Bangkok is a lively metropolis that offers a wide variety of attractions and activities. It is also possible to use it as a starting point for day journeys to adjacent locations or to other provinces located within the nation.

Visit some of Bangkok’s most famous attractions, like the Grand Palace, Wat Phra Kaew, Wat Pho, and Wat Arun, immediately following breakfast. Because of their close proximity to one another, all of these locations are easy to reach on foot without much effort.

The construction of the Grand Palace began in the year 1782. After it was finished, several kings and their courts resided there until it was abandoned in 1925. A fast forward to the present day reveals that it is now a well-known destination for tourists and a location for a variety of activities. Within the grounds of the palace are a number of buildings, including temples, statues, and other structures.

The Phra Maha Monthien is located in the heart of the complex, and it is a collection of significant buildings that was once home to both the throne hall and the residence of Thailand’s monarchs. You’ll also be able to spot the Phra Thinang Chakri Maha Prasat, which was designed drawing inspiration from both Thailand and Europe.

Another notable structure that may be found on the grounds is known as Wat Phra Kaew. The Thai people place a high level of importance on the statue of the Emerald Buddha that can be found inside of it. After snapping a number of photographs and touring the Grand Palace, you should head to Wat Pho, which is only a short distance away and can be reached on foot. It is the location of a reclining Buddha that is 46 meters long and may be found there.

After exploring the adjacent temples, stop for a bite to eat at one of the eateries or cafes in the area before continuing on to Wat Arun. The latter is also referred to as the “Temple of Dawn,” and its primary structure, which resembles a tower, is covered in brilliantly colored and intricately designed porcelain encrustations.

After you have finished seeing the top attractions that Bangkok has to offer, you can take some time to unwind by going on a river cruise, hanging out in Khao San Road, Sukhumvit, Silom, or any of the other popular areas of the city. Wat Arun, the Grand Palace, and a few of the other important structures in the city are illuminated when the sun goes down.

Spend another day away from the hustle and bustle of the city by going on an excursion to the Damnoen Saduak Floating Market as well as other locations. Locals and visitors travel to the market in Ratchaburi, which is one of the most famous in the country, to shop or just to watch the pandemonium of boats moving up or down the river. The market is one of the most famous in the country and is located in Ratchaburi. It is a destination frequented by tourists, hence prices there are typically higher than at comparable local markets. Despite this, getting a good look at it is still an eye-opening experience. Taking a tour is the most time-efficient way to go to the market. You may make a reservation for one through Klook or through one of the many travel firms in Bangkok that provide it along with other attractions.