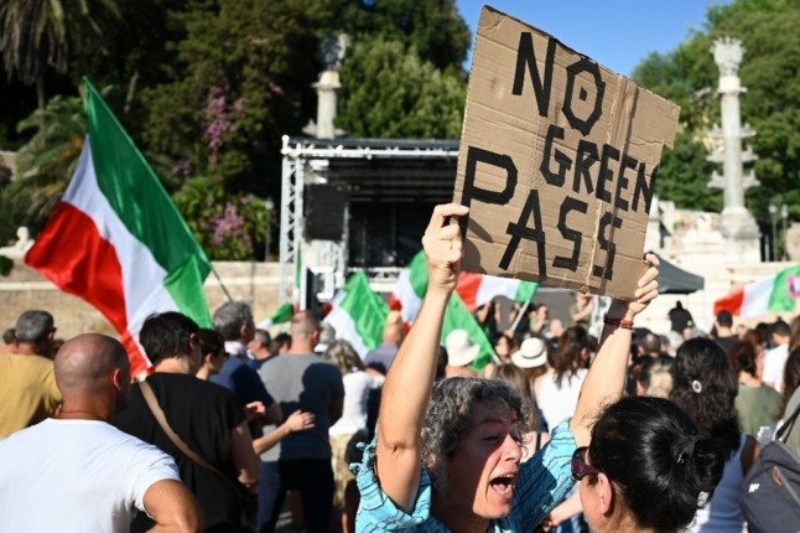 Protests against the green pass break out in Italy

The customers of the indoor venues seem to appreciate and indeed require strict control to be sure they are close to people with the minimum risk factor. But the owners of bars and restaurants just do not want to know, not even to ask for the Green Pass in Italy, where protests have exploded in these hours. And even the stewards, who check tickets and documents at the stadium, are now refusing. The school unions say they are ready for the barricades, and in an electronic components company in Turin, the first strike was called to say no to the obligation of green certification at the canteen.

“Correct use of green certification in restaurants will become central in September-October when people will eat more indoors” underlines Fabio Siciliano, of the CTS, adding that it is necessary for restaurateurs to carry out checks in a serious manner, also because if faced with an obvious abuse or an obvious forgery of the documents is not required to be checked, one becomes responsible and can be sanctioned.

“And for the weekend of August the prefects are already setting up sample control services on the Green Passes, especially in the nightlife areas and in the Viminal circular that defined the burden of checks for the owners of the activities in which the Pass is requested does not seem to have appeased the protests against the green certification, both in terms of checks and use.

On the contrary, the opposite wave seems to grow under the pressure of the discontent of various categories. wishing to have been exempted from the task of verifying that the person showing the Pass is also the actual holder, they return to the attack by proposing the self-certification by the customer, a sheet that the owners of the premises would withdraw when accommodating the customer at the table and then forward it to the police for an a posteriori verification which, in fact, would completely remove the manager from the burden of requesting the Pass and verifying its legitimacy with the Verificac app19.

“If we have to get people to check documents, how are we going to work? It may happen that 50 people arrive together », confirms Maurizio Pasca, vice president of Fipe. And two out of three locals, according to Unimprese, fail to check the identity document associated with the Green Pass.

The most surprising of the protests is that of the stewards who – unlike the owners of the activities – say they are willing to intervene only for the control of identity documents, as they already do to verify that whoever enters the states is the real ticket holder. But at the Green Pass, they don’t want to get involved. “The Viminale circular generates erroneous interpretations – says Ferruccio Taroni, president of the National Association of Security Delegates. We are suggesting event management delegates use different people for green pass control. We will intervene only in cases where it will be necessary to show an identity document. There are already few stewards to check tickets. The companies will have to make use of volunteers, such as retired law enforcement officers.”