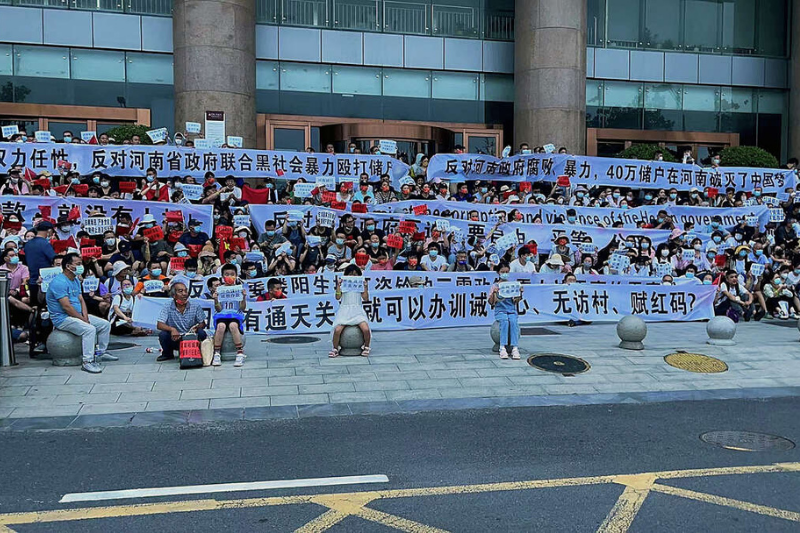 Police are being confronted by furious Chinese bank depositors

Police are being confronted by furious Chinese bank depositors

An outraged mob of Chinese bank depositors confronted police in a case that has gained attention because of previous attempts to deploy the COVID-19 tracking app to prevent them from mobilizing on Sunday.

Hundreds of protesters hoisted banners and chanted on the broad steps of the entrance to a branch of China’s central bank in Zhengzhou, Henan province, roughly 620 kilometers (380 miles) south of Beijing. A protester’s video captures plainclothes security officers being hit with water bottles and other things as they assault the mob.

Security personnel dressed in plain white or black T-shirts can shove individual protesters forward and down staircases in later social media videos. Exactly how many people received this treatment is unknown. Henan and Zhengzhou authorities did not return phone calls on Sunday.

Six rural banks in Henan and Anhui provinces offered higher interest rates to thousands of clients who signed up for accounts. Following media rumors that the head of the bank’s parent firm was on the run and wanted for financial crimes, customers discovered they couldn’t withdraw their money.

A statement from a woman from Shandong province, who only revealed her last name, Zhang, since she was afraid of retribution, “We came today and wanted to get our savings back, because I have elderly people and children at home, and the inability to withdraw savings has seriously affected my life.”

When the COVID tracking app was misused last month, what had been a local scandal became a national one. Health statuses on the app have turned red for many who had planned to come to Zhengzhou to demand action from regulators.

There have been reports of police questioning visitors to the city after they check into their hotel. Later, five Zhengzhou officials were sanctioned.

Hundreds of demonstrators gathered outside the People’s Bank of China in Zhengzhou on Sunday morning. It is possible to observe police trucks with flashing lights on early morning videotape. By 8 AM, demonstrators had gathered on the other side of the roadway, according to the AP.

It wasn’t just the uniformed police officers that were on the scene. The protesters refused to speak to the two government officials that arrived: a bank regulator and a local government representative. The AP reported that Zhang and another protester had met the officials before and had no faith in their claims.

The police used a megaphone to inform the demonstrators that they were being imprisoned and punished for holding an illegal assembly. The men in T-shirts charged the gathering around 10 AM and dispersed it. Zhang claimed to have witnessed ladies being dragged down the bank’s stairs.

Zhang stated that she got hit, then asked the officer, “Why did you hit me?”

“What’s wrong with beating you?” the police officer responded.

The demonstrators were taken away by bus to separate locations, where Zhang claims they were made to sign a paper promising not to meet again.