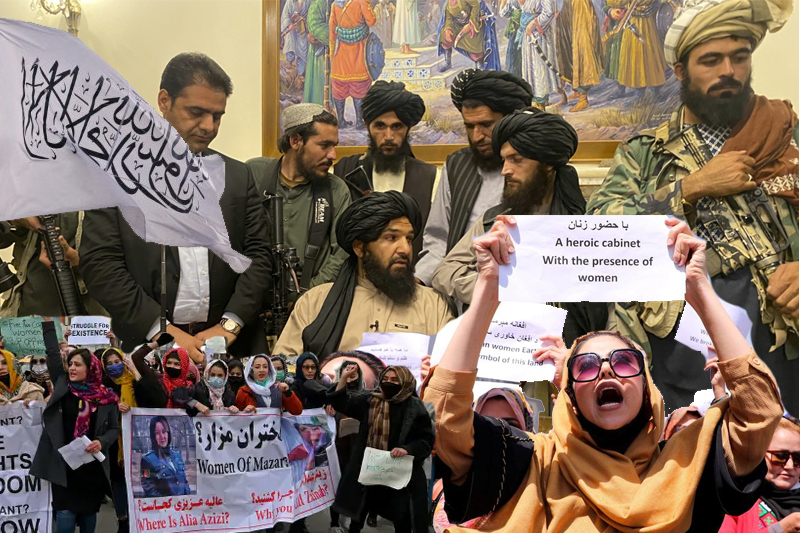 one year to taliban takeover womens fight for rights continues

One year to Taliban takeover: Women’s fight for rights continues

A year since the American troops exited Afghanistan. A year since terror entered lives of countless vulnerable Afghans. A year since women were denied their rights to education, work, and even exit their house freely. Now one year since then, the crackdown on women by Taliban regime continues – hopes are subdued but still alive.

Fight for right to education

For majority of girls in Afghanistan it has been a year since they entered classroom. With no hopes that Taliban will allow them to exercise their right to gain education, some are trying relentlessly to keep the flame of education ignited in lives of scores of Afghan girls. In Kabul, Sodaba Nazhand has set up an informal school at her house for girls, where she and her sister try their best to provide education to girls who should have been in secondary school. “When the Taliban wanted to take away the rights of education and the rights of work from women, I wanted to stand against their decision by teaching these girls,” Nazhand says.

Taliban has been very cryptic and shrewd in giving false projections to the international community that it has evolved and is no longer the once very rigid regime. The truth is – it still is. The regime has banned girls from getting education past sixth grade, but have permitted them to attend universities. This exception, in some time, will no longer matter as girls will not be there to go to colleges, given they aren’t allowed to go beyond sixth grade.

Many even ask the question whether it is of any sense to get education when Taliban won’t allow them to work or pursue their dreams. The reality is very horrid and heartbreaking.

Fight for right to work

Masuda Samar, a 43 year old senior official in an Afghanistan ministry, has not stepped into her office for a year now. Taliban regime has restricted women from entering the workplaces, which is as good as firing them. “We went back several times in the last one year [to appeal for their jobs]. We decided to wait at the gates of the ministry for days at end waiting to get a hold of the new minister, to convince him to change this decision, but they [Taliban guards] would send us away,” Samar recounts. They are given a meagre salary to stay at home and keep their voice silent against this discrimination. “Each time I go to the bank, I wipe my tears first because I feel so insulted to take that amount, that I don’t even have the right to work and earn. I feel like a beggar,” she said.

Before the Taliban takeover, women made up for 22 per cent of Afghan workforce. The figure though still low, marked years of progress made by the country after escaping from Taliban. But now with the regime back into force, the patriarchy and conservative stance is resumed.