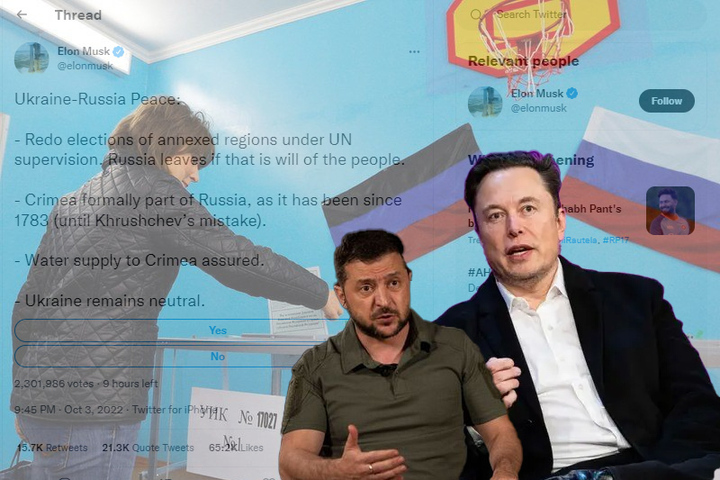 On Monday, October 3, billionaire Elon Musk urged Twitter followers to vote in on a proposal to end Russia’s conflict in Ukraine, which was immediately criticized by Ukrainians, including President Volodymyr Zelenskiy, who reacted with his own poll.

Musk wrote, “Russia will leave if that is the decision of the people.”

Tesla Inc’s chief executive officer proposed that Crimea, which Moscow annexed in 2014, be legally acknowledged as part of Russia, that Crimea’s water supply be guaranteed, and that Ukraine stay neutral. He requested that Twitter users vote “yes” or “no” on the proposal.

“Dear @elonmusk, when someone tries to steal the wheels of your Tesla, it doesn’t make them legal owner of the car or of the wheels. Even though they claim both voted in favor of it. Just saying,” Lithuania’s President Gitanas Nausėda tweeted in response.

Musk, who is also the CEO of SpaceX, followed his initial tweet with a second poll: “Let’s try this then: the residents of the Donbas and Crimea should determine whether they are part of Russia or Ukraine.”

He stated that he didn’t care if his suggestion was controversial, but he did worry that “millions of people may die needlessly for essentially the same result.”

“Russia has >3 times population of Ukraine, so victory for Ukraine is unlikely in total war. If you care about the people of Ukraine, seek peace,” he posted on Twitter.

In February, when Ukraine’s internet was crippled due to Russia’s incursion, Musk reacted to a government official’s tweet requesting assistance. Musk stated that SpaceX’s Starlink satellite internet service is now accessible in Ukraine and that the company is deploying additional terminals to the nation.

“SpaceX’s out-of-pocket expense to enable and sustain Starlink in Ukraine is around $80 million to date.” Our assistance to Russia is $0.00 Clearly, we are pro-Ukraine,” Musk tweeted on Monday evening.

Andriy Melnyk, the outspoken departing ambassador of Ukraine to Germany, had a direct response to Musk’s peace initiative. Melnyk was criticized in July for praising the infamous Ukrainian nationalist leader of World War II, Stepan Bandera.