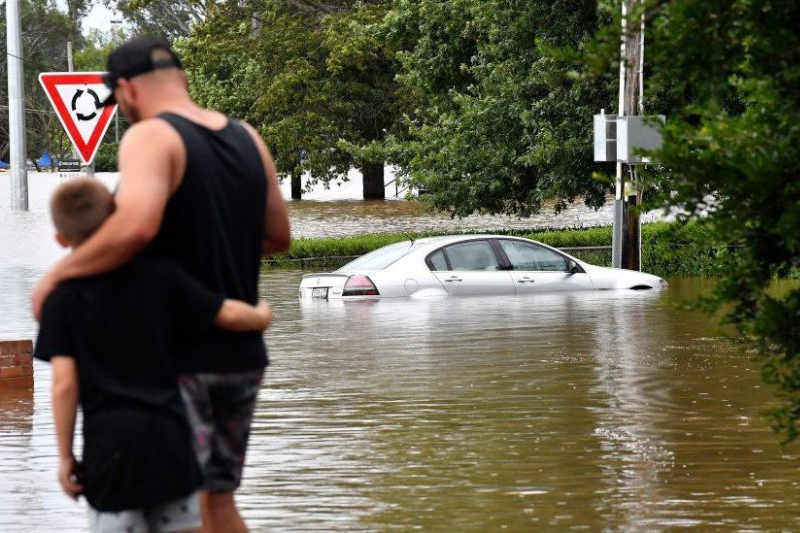 As far as Sydney’s northern and western borders were concerned, the worst of the floods occurred along with the Hawksbury-Nepean river system

Officials announced on July 5 that a flood emergency affecting 50,000 people in and around Australia’s largest city had submerged hundreds of homes.

More than 100 people were rescued overnight from cars stranded in floodwaters or residences that had been flooded in Sydney, according to the State Emergency Service manager.

The city of five million people has been hit with its fourth flood emergency in 16 months after days of severe rain forced dams to overflow and streams to break their banks.

Overnight, the New South Wales state government declared a state of emergency in 23 local government regions, which activated federal aid for flood victims in the state.

An additional 50,000 individuals have been affected by evacuation orders and warnings to get ready to leave their homes, up from 32,000 on Monday, according to New South Wales Premier Dominic Perrottet.

Mr. Perrottet stated that “This event is far from over. Please don’t be complacent wherever you are. Please be careful when you’re driving on our roads. There is still a substantial risk for flash flooding across our state.”

By the fourth day of the flooding crisis, no one had died or been seriously injured, thanks to the skill and dedication of rescue crews.

More than 20 centimeters (almost 8 inches) of rain fell in 24 hours in southern Sydney, more than 17 percent of the city’s annual normal, Bureau of Meteorology meteorologist Jonathan How said.

Sydney’s eastern suburbs remained under severe weather warnings for heavy rain on Tuesday. There were also warnings for the coast north of Sydney, as well as for the Hunter Valley.

On Sydney’s northern and western outskirts, the worst flooding occurred along the Hawkesbury-Nepean rivers.

Mr. How added that “the good news is that by tomorrow afternoon, it is looking to be mostly dry, but, of course, we are reminding people that these floodwaters will remain very high well after the rain has stopped.”

“There was plenty of rainfall overnight, and that is actually seeing some rivers peak for a second time. So you’ve got to take many days, if not a week, to start to see these floodwaters start to recede.”

A cargo ship with 21 people on board was unable to be towed out to sea due to stormy weather and high waves on the New South Wales coast.

Swells up to 8 meters (26 feet) and winds gusting to 30 knots (34 knots) against cliffs threatened to ground the ship as it departed Wollongong, a port south of Sydney, on Monday morning.

When a towline snapped in an 11-meter (36-foot) swell late Monday, the Port Authority’s Philip Holliday said, an attempt to tow the ship into the open ocean was halted.

Two anchors and two tugboats were used to keep the ship at a distance from the coast that was greater than it had been on Monday. Mr. Holliday said the new goal was to bring the ship to Sydney as soon as Wednesday when the weather and sea conditions had calmed down. The ship’s crew was supposed to fix the engine at sea, as initially planned.