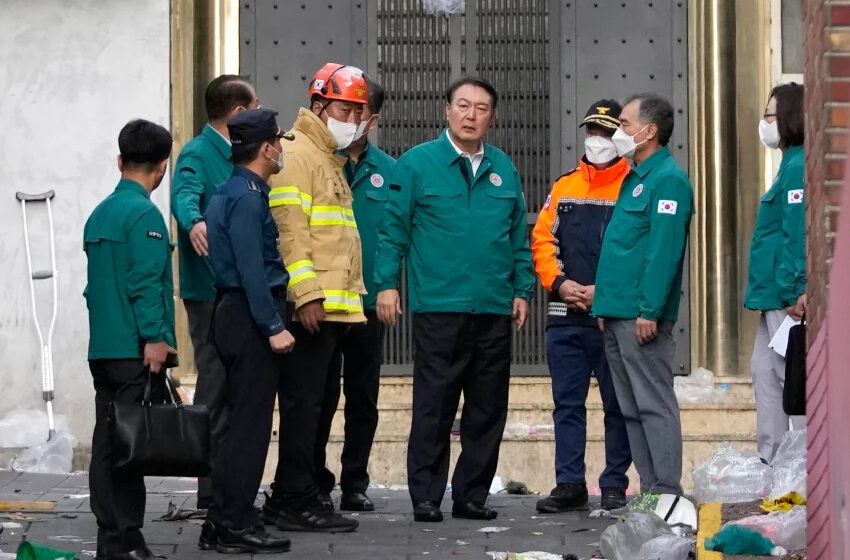 After a Halloween crush killed over 151 people in a crowded nightlife area in Seoul on Sunday, October 30, South Korea’s President Yoon Suk-yeol proclaimed a time of national mourning.

Yoon sent his sympathies to the victims, who were primarily young adults and teenagers, and wished the injured a swift recovery.

He issued a statement that read, “This is extremely unfortunate. Last night, a catastrophe and disaster that shouldn’t have happened occurred in the center of Seoul.”

On Saturday night, a large throng partying in the well-known Itaewon district poured into an alley, according to emergency personnel, who also warned that the dead toll might go up.

19 foreigners were among the 151 confirmed deaths, according to Choi Sung-beom, the head of the Yongsan Fire Station. He reported that 82 persons had been hurt overall, 19 of them critically.

It was the city’s first Halloween celebration in three years following the lifting of COVID-19 restrictions and social exclusion. The partygoers were mostly dressed in Halloween costumes and masks.

As the evening wore on, some witnesses said the gathering became more rowdy and furious. The incident happened around 10:20 p.m. (1320 GMT).

We have a lot of casualties since several people fell at a Halloween festival, Choi added. Numerous victims were found close to a nightclub.

According to Choi, several of the victims were young women in their 20s; the foreigners killed came from Norway, China, Iran, and Uzbekistan.

Witnesses described turmoil just prior to the stampede, with the police there in advance of the Halloween celebration occasionally struggling to keep the masses under control.

Moon Ju-young, 21, claimed that before to the incident, there were obvious indications of trouble in the lanes. According to him, it was at least ten times as packed as usual.

Hundreds of people were jammed into the tight, sloping lane, crushed and immovable as emergency personnel and police attempted to extricate them, as seen in social media footage.

All of the fatalities, according to Choi, the fire chief for the Yongsan district, were probably caused by the congestion in the only small alley.

According to witnesses and fire officials, people kept pouring into the lane, which was already completely crowded, when those at the top of the steep street fell, causing individuals below them to topple over one another.

One mom claimed that after being imprisoned for more than an hour, her daughter was saved after being rescued from the crowd.