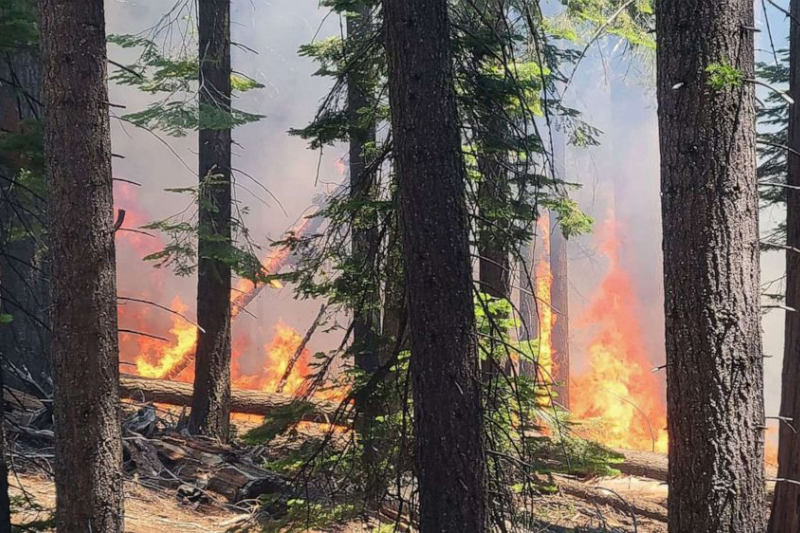 The largest grove of giant sequoias in Yosemite National Park is under threat from a raging wildfire in California. The Washburn Fire has grown to 1,591 acres in the last 24 hours, according to the National Interagency Coordination Center.

Some of the world’s largest and oldest redwood trees are under fire, and firefighters are battling it out in challenging terrain.

The fire has forced the evacuation of nearby campers and residents, and the dense smoke it has produced has harmed the air quality in the area and obscured the park’s natural beauty.

500 massive sequoias, including the 3,000-year-old Grizzly Giant in the Mariposa Grove, are in danger of being destroyed by the flames, which started on July 7.

The fire hasn’t ruined any of them yet. As part of its “proactively protecting” strategy, Yosemite’s fire and aviation management department claimed it had installed sprinklers to raise humidity levels surrounding the trees and had cleared the area of any potential fuel sources.

In addition to the Wawona hamlet, which is located inside the national park, and hundreds of campers, almost 1,600 people have already been evacuated as a result of the Washburn Fire.

The investigation into what started the blaze is still ongoing. The hot, dry weather is making it tough for firefighters to keep the flames under control.

Giant sequoias are among the world’s largest trees. The tallest one stands at a height of 83 meters (275 feet) and has a base diameter of over 11 meters (36 feet).

They are among the longest-living organisms in the universe, with a lifespan of up to 3,000 years.

The first scenic natural area to be protected by the federal government for “public use, resort, and enjoyment” in Mariposa Grove. In 1864, President Lincoln signed the bill into law.

Forest fires in California decimated thousands of gigantic sequoias last year. More than 35,000 wildfires have raged across the United States so far this year, which is a significant increase from last year.

Wildfires are becoming more frequent as a result of climate change-induced increases in temperature and increased severity of drought.