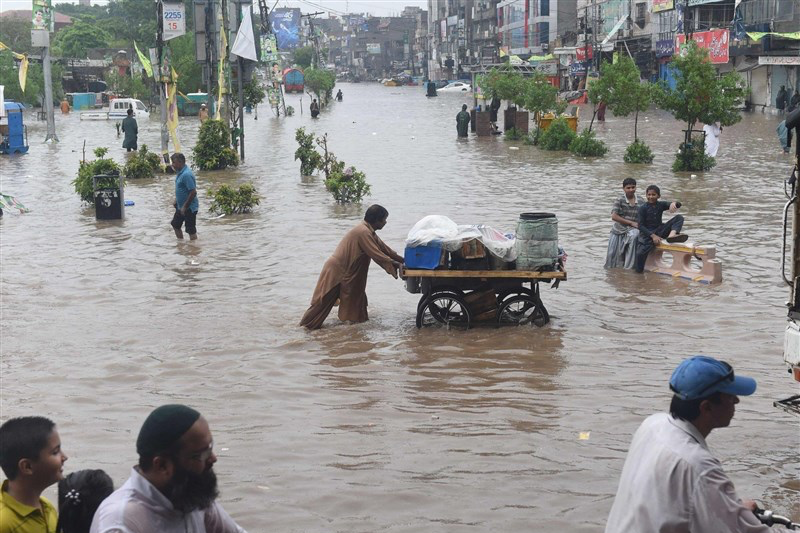 Pakistan's monsoon rains kills 77 in the past 3 weeks

Pakistan’s monsoon rains kills 77 in the past 3 weeks

As many as 77 people, including women and children, have been killed in Pakistan’s recent rain-related accidents, the country’s climate change minister said on Wednesday.

Since June 14, monsoon rains have caused damage to homes, highways, bridges, and power stations across the country, Sherry Rehman reported during a news conference in Islamabad, the nation’s capital, as storms continued to hammer the country.

According to Rehman, 39 of the 77 persons who have perished in rain-related accidents since the beginning of the month were killed in Baluchistan alone.

Regarding the casualties that were caused by the rain, Rehman declared, “This is a national disaster.”

The deluges caused by the floods in Baluchistan could be seen on television footage carrying away some automobiles.

Islamabad and the eastern part of the Punjab province were also hit with heavy rain.

The President of Pakistan, Arif Alvi, released a statement in which he expressed his regret and sorrow at the loss of life across the country, including in the province of Baluchistan.

According to the provincial emergency management office, parts of the city of Quetta, which serves as the capital of Baluchistan province, were flooded, including residential areas.

Rehman Recent precipitation in Pakistan was 87% heavier than the typical amount of rain that falls there.

She made the connection between the new pattern and the changes in the climate, adding that Pakistan should be prepared to face tremendous flooding because the country’s glaciers are melting at a quicker pace than before. This results in flash floods, which in turn cause damage to the infrastructure.

According to Naseer Nasar, a spokesman for the Baluchistan disaster management department, at least 50 people have been hurt in accidents due to rain in the province since June. These instances have been reported to the Associated Press. He stated that rescue workers were moving people to safer locations in Baluchistan that were further away from the floods and rain-affected areas.

Many cities in Pakistan have difficulty coping with the yearly monsoon flood, which has led to criticism of the country’s administration for its lack of proper preparedness. According to experts, rains are vital for irrigating crops and replenishing dams and other water reservoirs in Pakistan, and the season extends from July through September.

Since the beginning of this year, certain regions in the southern part of Pakistan have been afflicted with drought.