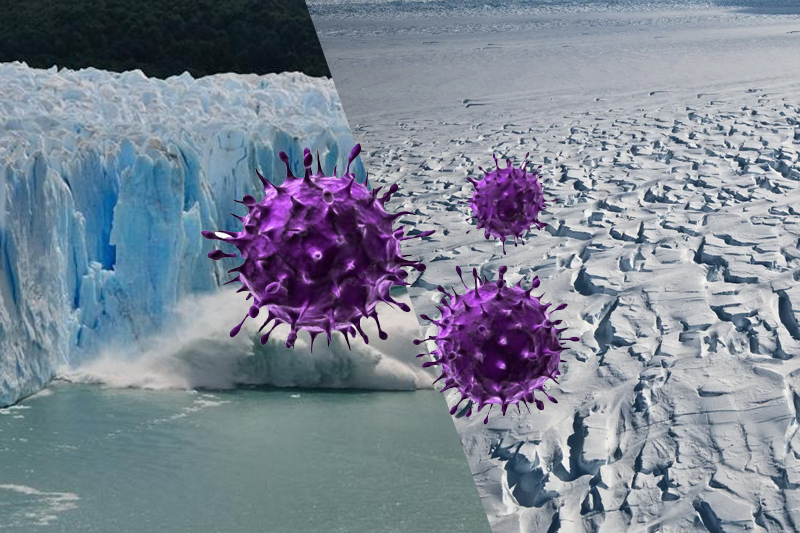 study finds next probable pandemic might be sourced from melting glaciers

Study finds next probable pandemic might be sourced from melting glaciers

A new data from an extensive study has suggested that the next global public health threat, a pandemic, might be sourced from matter in the melting ice, and not through bats or birds. Genetic analysis conducted of samples of soil and lake sediments from Lake Hazen, which is the world’s largest high Arctic freshwater lake, suggests that the “risk of viral spillover – where a virus infects a new host for the first time – may be higher close to melting glaciers”.

The findings from the study thereby imply that with rise in global temperatures triggered by aggressive climate change, it becomes more probable that viruses and bacteria that have been locked up in glaciers and permafrost for decades and centuries could be reawakened, leading to infecting local wildlife. A perfect example lies in the history for this – in 2016 an outbreak of anthrax in northern Siberia that had killed a child and infected at least seven other people in the region, was attributed to a heatwave. The heatwave in region had led to melting of permafrost and had exposed an infected reindeer carcass. Before this outbreak of 2016, the last outbreak in the region was back in 1941.

In order to further understand the risk to public health posed by frozen viruses, Stéphane Aris-Brosou along with her colleagues at the University of Ottawa in Canada had collected soil and sediment samples from Lake Hazen. They then sequenced the RNA and DNA in these samples in order to “identify signatures closely matching those of known viruses, as well as potential animal, plant or fungal hosts, and ran an algorithm that assessed the chance of these viruses infecting unrelated groups of organisms”. The research, that is published in Proceedings of the Royal Society B, has suggested that “the risk of viruses spilling over to new hosts was higher at locations close to where large amounts of glacial meltwater flowed in – a situation that becomes more likely as the climate warms.”

“The only take-home that we can confidently put forward is that as temperatures are rising, the risk of spillover in this particular environment is increasing,” said Aris-Brosou. “Will this lead to pandemics? We absolutely don’t know.”