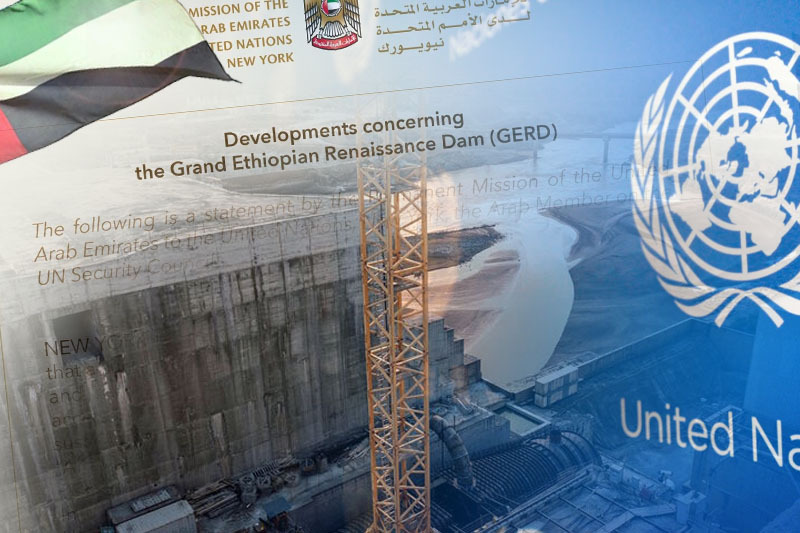 United Arab Emirates is continuing to work regionally and globally on its principle of harmony and peace through talks and negotiations. The Permanent Mission of the United Arab Emirates to the United Nations has stressed on Tuesday that the country reiterates its support to African Union with belief that AU sponsored talks on GERD (Grand Ethiopian Renaissance Dam) is well within reach. The mission stressed that 2015 Declaration of Principles is to remain as a basic reference.

“The UAE believes in the possibility of concluding the negotiations on the GERD in a successful way and recognizes the valuable opportunity this presents to enhance and accelerate regional integration while bolstering cooperation and sustainable developments in the region and beyond in the spirit of finding ‘African solution for an African problem,” a statement by the mission of the UAE, the only Arab nonpermanent member of the UN Security Council, read.

For almost a year, African Union has been leading the GERD talks, while in presence of delegates from European Union, US and African Union’s legal and technical experts as observers of the negotiations. South Africa had led the AU brokered talks from 2020 till January 2021, and after that by DR Congo till April 2021. But no agreement could be reached due to “intransigence” by Ethiopia, according to Egypt and Sudan.

Since then Abu Dhabi took the initiative and brokered the technical talks on GERD, in May and June 2022. “The UAE believes the 2015 Declaration of Principles on the GERD remains a basic reference [for negotiations],” the Emirati mission said reaffirming the UAE’s support for the objectives and resolving their disagreements between the parties to maximize the benefits to all. The disagreement over the Nile River water is based on the standpoint of Ethiopia that is continuing to unilaterally fill the GERD “without agreeing with the downstream countries on the means of filling and operating the dam”. Egypt and Sudan, the two downstream nations have time and again expressed concerns about their rights on the water and impact of Ethiopia’s actions on the lives of people in their countries, specifically at the time of droughts. But Ethiopia continues to reject the concerns of Cairo and Khartoum, citing the project to be essential for production of electricity that is crucial to its economic development. The two nations have hoped that UAE might be able to resolve the disagreement through its active role at the global stage and amicable relations in Addis Ababa.