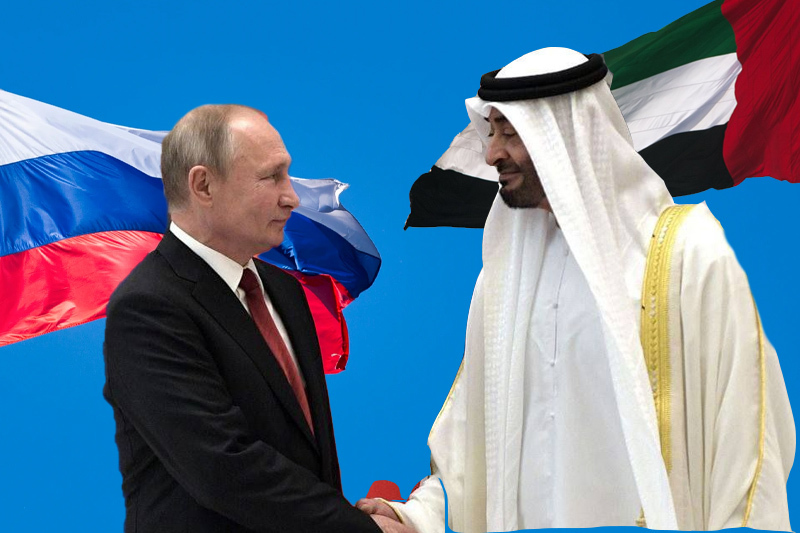 The UAE’s Ministry of Foreign Affairs and International Co-operation said that Sheikh Mohamed’s visit to Russia is part of the country’s “continuous endeavour to contribute to achieving security and stability in the region and the world, and to enhance fruitful and constructive co-operation with regional and international powers, in addition to communicating with all parties concerned in the Ukraine crisis to help reach effective political solutions.”

The ministry added that UAE “seeks to achieve positive results to reduce military escalation, reduce humanitarian repercussions, and reach a political settlement to achieve global peace and security.” During his visit to Russia, His Highness Sheikh Mohamed bin Zayed is also going to discuss with President Vladimir Putin the friendly UAE – Russia relations along with a number of regional and international issues and developments of mutual interest.

The UAE has always chosen the path of neutral position since the onset of Ukraine war, and the visit to Russia by President MBZ highlights the same neutral stance on the Russia – Ukraine war as the UAE President aims to bring diplomacy on table as a solution to continuing war. The UAE has underlined its readiness to support efforts that are aimed to explore a peaceful solution to the Ukraine crisis in Ukraine, thereby reiterating its position of supporting diplomacy, dialogue and respect for the rules and principles of international law.

The UAE – Russia relations are deep rooted across many sectors of mutual interest, one such alliance being the OPEC+, a group of key oil producers that includes UAE and Russia that decided to slash oil output to control the oil prices. Kremlin had praised the efforts by OPEC+, primarily efforts by the UAE for the move that was described by Kremlin spokesperson Dmitry Peskov as “balanced, thoughtful and planned work of the countries, which take a responsible position within OPEC”.

UAE has always been the pioneer exemplifying actions and decisions that are towards protection and respect of sovereignty of countries and states. This vision is deep rooted in the foreign policy of UAE and a basis of its values of non-interfering in affairs of other countries. But UAE has always been on side of humanity and people at times of wars and crises and worked towards providing humanitarian support to those in need. The visit by President Mohammed bin Zayed to Russia highlights these principles instilled in country’s leadership as the visit aims to find a diplomatic route to de-escalate the war in Ukraine.

Sheikh Mohamed bin Zayed Al Nahyan’s last had an official in-person meeting with President Putin when he had visited Abu Dhabi in 2019. That had followed the Declaration of Strategic Partnership signed between the UAE and Russia in 2018.