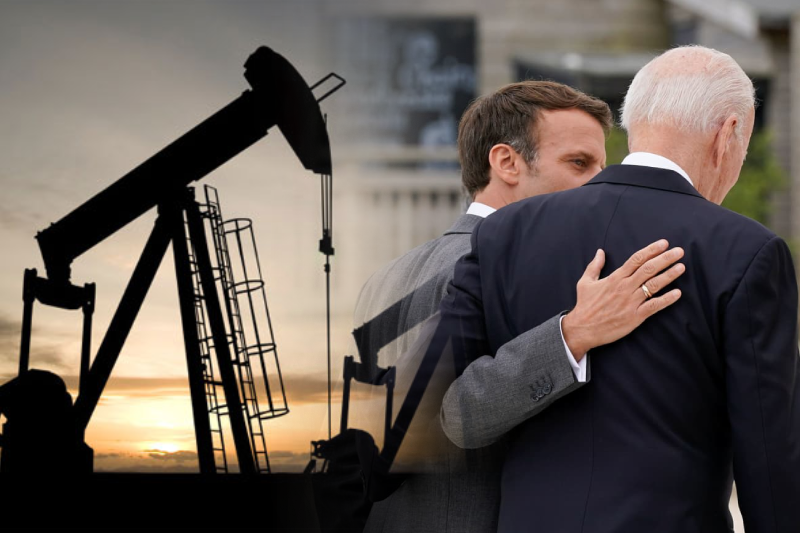 Macron to Biden: UAE and KSA have reached tip of their oil output capacity

On the sidelines of the G7 Summit, French President Emmanuel Macron told his counterpart in United States, President Joe Biden that the two top OPEC oil producers are at their maximum capacity of oil production. Macron has said to Biden that United Arab Emirates and Saudi Arabia cannot increase the oil production anymore, as told by the UAE President.

A video on social media shows Macron talking to Biden about the issue. UAE and Saudi Arabia have been tapped as the only two nations in OPEC (Organization of the Petroleum Exporting Countries) with extra capacity to bolster oil production that might reduce rising global oil prices.

“I had a call with MBZ,” Macron can be heard telling Joe Biden in the video, using shorthand for UAE President Sheikh Mohammed bin Zayed al-Nahyan. “He told me two things. I’m at a maximum, maximum (production capacity). This is what he claims.” Macron went on to add, “And then he said (the) Saudis can increase by 150 (thousand barrels per day). Maybe a little bit more, but they don’t have huge capacities before six months’ time.”

“In light of recent media reports, I would like to clarify that the UAE is producing near to our maximum production capacity based on its current OPEC+ production baseline,” said UAE Energy Minister Suhail bin Mohammed Al Mazrouei on Monday.

During G7, the leaders agreed on proposal to cap the Russian oil prices in attempt to pressurize its oil revenues and also tame the rising oil prices globally. This is while aligning with UAE and Saudi Arabia to bolster their oil production, as detailed in the proposal. But with the two OPEC countries already at peak of their production capacity, it might be a hinderance. At this France has proposed to tap other nations and bring in Iran and Venezuela back into the fold of oil producing nations.

But the ongoing tussle between Tehran and Washington over Iran nuclear deal revival complicates things. Furthermore, the US and European nations must keep their relations with UAE and Saudi Arabia on priority and not lose that partnership by favoring Iran.

UAE and Saudi Arabi critical for the West, specially at this time

Ukraine war led to the West imposing strict sanctions and embargos on Russia. The cutting off of Russian oil and gas and led to acute surge in global oil prices. At this time UAE and Saudi Arabia have come into the picture as very profitable allies.

If Iran gets into the picture at this time, it is only going to push away UAE and Saudi Arabia. US must ensure to keep into account that this is time to mend and bolster relations with Iran rather than cozying up with the country that has always stepped away from its agreements and assurances.