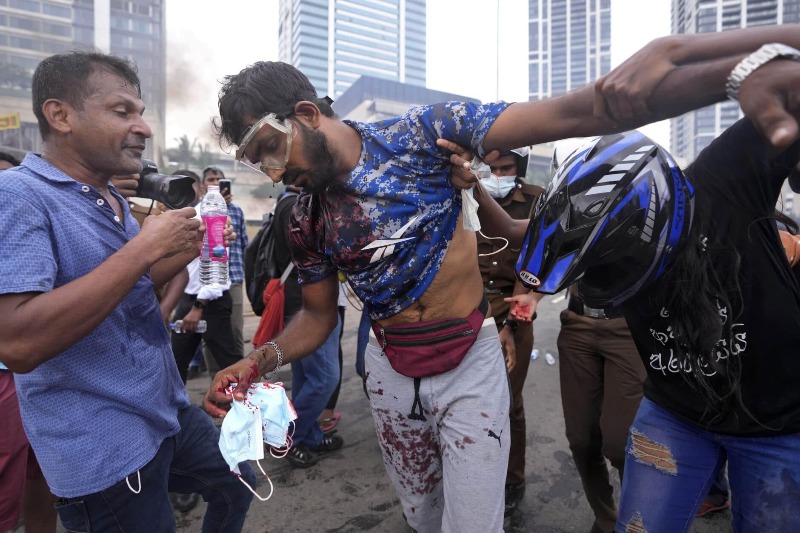 Early Friday morning, Sri Lankan security forces dismantled the major anti-government demonstration camp in the city and expelled protestors only hours before the new president was scheduled to name his Cabinet.

Ranil Wickremesinghe was inaugurated as Sri Lanka’s new president the day before the attack, replacing Gotabaya Rajapaksa, who fled and resigned when demonstrators stormed his palace and overran it.

There are both military and police officers on the scene. Police from the Special Task Force, equipped with batons and automatic assault weapons, pounced on demonstrators obstructing the Presidential Secretariat in Washington, DC, hours before they were supposed to leave.

Military personnel removed barricades built up by protesters to block the main gate of the seafront building, which demonstrators had partially occupied earlier this month.

There was also an armored personnel carrier in the region.

Activists announced they planned to turn over the state insignia on Friday afternoon, following Wickremesinghe’s swearing in of a new Cabinet.

The Cabinet will have the onerous task of guiding the country out of its greatest economic crisis since independence from Britain in 1948, which is expected to include a cross-section of political parties.

Since the beginning of April, thousands of anti-government protesters have gathered at the colonial-era edifice, which has been surrounded by the military since.

Baton-wielding troops were also seen advancing on small groups of demonstrators assembled at the “GotaGoGama (village)” as they approached them.

Leading Sri Lankan barrister Saliya Peiris slammed the military action and warned that it would harm the country’s international reputation.

Peiris said in a statement that “unnecessary use of excessive force will not benefit this country and its international image.” Security personnel, he said, had detained many persons, including a lawyer.

The military used loud-hailers to issue orders to a small group of men and women camped near the secretariat to disperse and limit themselves to a designated protest spot.

The main roads leading to the region were sealed off by police in an effort to keep the demonstrators at bay.

After seizing Rajapaksa’s palace on July 9, protesters who had been calling for his resignation had taken control of the area, compelling him to flee to Singapore and finally stepping down.

Until Wickremesinghe was confirmed as the new president by parliament on Wednesday, Rajapaksa’s successor, former prime minister and six-time leader of the country Wickremesinghe, temporarily assumed command.

demonstrators were told by Wickremesinghe not to occupy state buildings and that if they didn’t leave on their own, they would be removed.

Protesters also set fire to Wickremesinghe’s private residence in the capital on the day Rajapaksa was forced to depart.

The new president has also declared a state of emergency, giving the military broad authority and allowing police to keep individuals without charge for lengthy periods of time.

A national unity government will be sworn in on Friday, and it is expected to include representatives from both the administration and the opposition.

Sri Lanka has been left reeling from a foreign exchange crisis compounded by mismanagement, which has resulted in long power outages and record-high inflation.

Food, gasoline, and medication shortages have plagued the country’s 22 million residents for months.

On Wednesday, a court ruled that the protestors must leave a portion of their camp and remain in a designated area of the camp.

Anti-government protesters have accused Wickremesinghe of acting as a proxy for the influential family of former president Mahinda Rajapaksa, which Wickremesinghe denies.