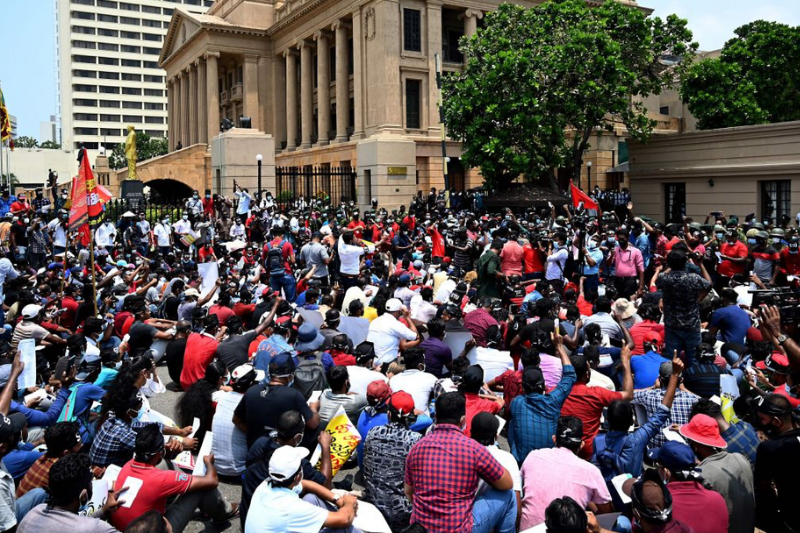 Demonstrators seeking the resignation of Sri Lanka’s president forced their way into his mansion on Saturday, a local television report stated, as thousands of people marched in the capital condemning the island nation’s worst economic crisis in recent memory, according to the local news agency.

A large crowd appeared to be gathered outside and inside Rajapaksa’s Colombo mansion, though it was unclear if Rajapaksa himself was there.

As they approached the front gates of the official residence, police had earlier used tear gas to disperse demonstrators. In the end, the demonstrators smashed through the barricades and entered the building.

Protesters have held Rajapaksa’s office entrance for three months, blaming him for the country’s economic troubles.

The police in Sri Lanka used tear gas on protestors calling for the resignation of President Gotabaya Rajapaksa and his cabinet on Saturday amid the island nation’s worst economic crisis in recent memory.

After a curfew was lifted, thousands of Sri Lankan flag-waving protestors rode in the few vehicles available on the highways. In contrast, others took to the streets on bicycles, and more walked to protest sites in Colombo from the suburbs.

Protesters have held Rajapaksa’s office entrance for three months, blaming him for the country’s economic troubles.

The Prime Minister of Sri Lanka, Ranil Wickremesinghe, declared last month that the country’s economy had collapsed. International Monetary Fund (IMF) negotiations have been complicated because the government entered into negotiations as a bankrupt state.

Due to a lack of foreign cash, Sri Lanka stated in April that it would be postponing the repayment of foreign debts. It owes $51 billion in foreign debt, of which $28 billion must be repaid by the end of 2027.

On Friday night, police imposed a curfew in Colombo and other major cities. Still, it was lifted early on Saturday morning when legal and opposition lawmakers objected, claiming it was illegal.

The president’s official home is tightly barricaded, and the city’s riot police and soldiers are on the scene.

Julie Chung, the U.S. ambassador to Sri Lanka, urged people to protest peacefully and urged the military and police “to provide peaceful protestors the space and security to do so” on Friday.

For the past two decades, Sri Lanka has been under the leadership of the Rajapaksa political dynasty. Prime Minister Ranil Wickremesinghe resigned last month, along with the resignations of his three other brothers and his nephew. Power has remained in the hands of President Rajapakse.

For a short time, protests dwindled after Wickremesinghe became prime minister in May. However, the public is calling on him to resign since he failed to deliver his pledges.