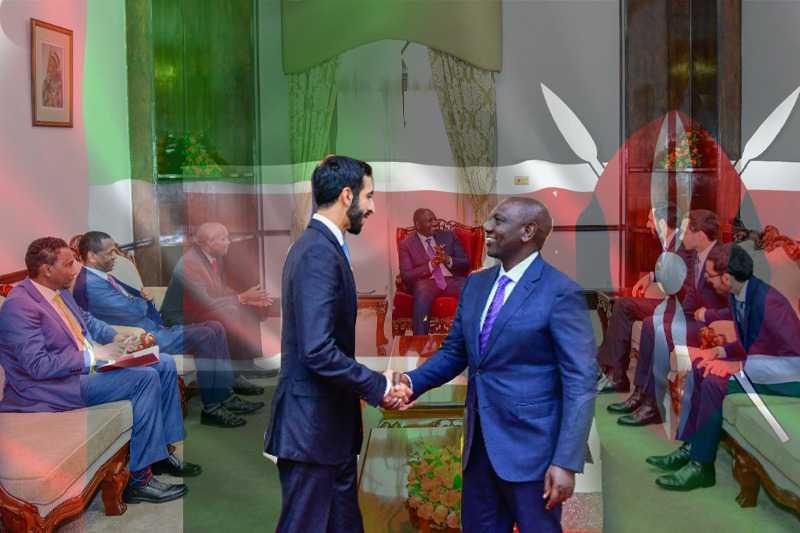 UAE’s Minister of States, His Excellency Sheikh Shakhbut bin Nahyan bin Mubarak Al Nahyan met with His Excellency William Samui Ruto, the President of the friendly Republic of Kenya at the presidential residence in Nairobi. He reaffirmed the keenness of UAE to strengthen relations with the friendly country of Kenya.

Sheikh Shakhbut conveyed greetings of UAE President His Highness Sheikh Mohammed bin Zayed Al Nahyan and His Highness Sheikh Mohammed bin Rashid Al Maktoum, Vice President and Prime Minister of the State and Ruler of Dubai, to the President of Kenya and their wishes for peace, progress and prosperity for Kenya and people of the country. In return the President of Kenya conveyed his greetings of the leaders of UAE and his wishes for the UAE government and further development and growth for the people.

His Excellency William Samui Ruto welcomed the visit by His Excellency Sheikh Shakhbut bin Nahyan and stressed on the depth of the Emirati and Kenyan friendship. He also affirmed his country’s keenness to expand and strengthen the trade relations with the UAE for further enhancing the development efforts in both the countries.

His Excellency Sheikh Shakhbut bin Nahyan Al Nahyan has affirmed that the relations between the UAE and the Republic of Kenya are in continuous progress, stressing the UAE’s keenness to strengthen relations of joint cooperation, in a manner that serves the mutual interests of the two countries and brings benefit to their peoples, as reported by the state news agency WAM.

The two leaders had met last month on the sidelines of the 77th session of the United Nations General Assembly. During that meeting, Sheikh Shakhbut and President Ruto had also reviewed opportunities thagt are available for sustainable partnerships in energy, development, agriculture, transport, and the economy of both nations. They had also discussed regional and global issues of importance and coordination between the UAE and Kenya on the UN Security Council, on which both countries are serving terms as elected members, as reported by WAM