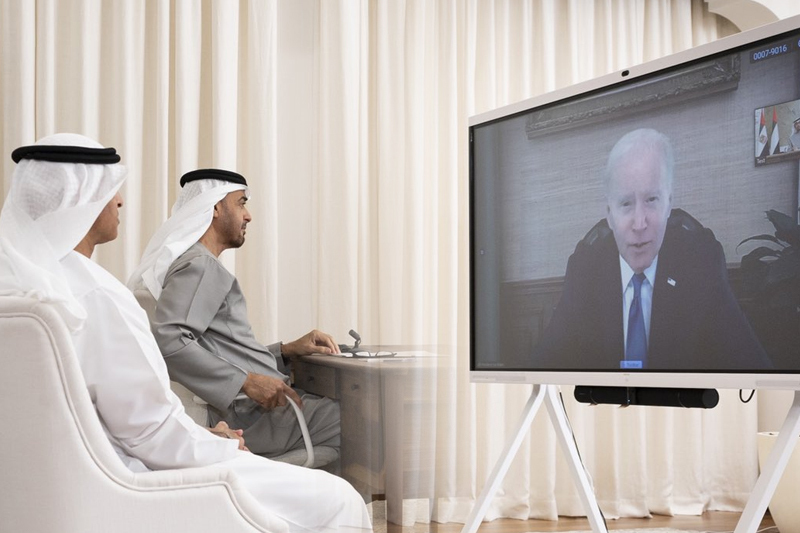 UAE President His Highness Sheikh Mohamed bin Zayed Al Nahyan held a virtual meeting with President of United States of America Joe Biden on Wednesday, November 2, 2022. The two leaders in the meeting reaffirmed the depth of the strategic relationship between UAE and US while also discussing the global challenges in sight, including energy security.

PACE will be mobilizing $100 billion in funding and investment towards deploying 100 new gigawatts of clean energy in the US, UAE, and other global emerging economies by 2035.

“In a video call with President Biden today we reaffirmed the depth of UAE-US relations and discussed our recently launched joint initiative to accelerate the energy transition. We also addressed topics including energy security and our shared commitment to enhancing climate action,” Sheikh Mohamed wrote on Twitter.

The UAE President and US President affirmed during the meeting, their common interest in achieving stability in the global energy market, increasing the investments in renewable energy sector and expanding and strengthening their close cooperation on issues including climate protection and energy security. In this regard, the President of the UAE also highlighted the large investments made by the UAE to increase the production capacity of state from both renewable energy and traditional low carbon energy. His Highness Sheikh Mohammed bin Zayed Al Nahyan talked about the country’s leading role in energy transition, expanding its own renewable energy capacity by 200 times over the last ten years, that included building three of the largest solar projects in the world at the lowest cost.

Lauding the PACE initiative, President Sheikh Mohamed and President Biden reaffirmed their shared commitment to climate action in line with their net zero 2050 goals. Looking ahead to COP27 in Egypt later this month and to COP28 in the UAE next year, both countries recognized PACE as a significant catalyst to reach net zero by accelerating investment in clean energy projects, technologies, and resources, as noted by state news agency WAM.

The meeting between both countries’ heads highlights the leadership of UAE and the country’s global position through its influential and constructive role towards benefit of the people across world in terms of achieving development, prosperity, energy security and climate protection. It highlights the political and diplomatic role of the UAE and His Highness Sheikh Mohammed bin Zayed Al Nahyan, globally.