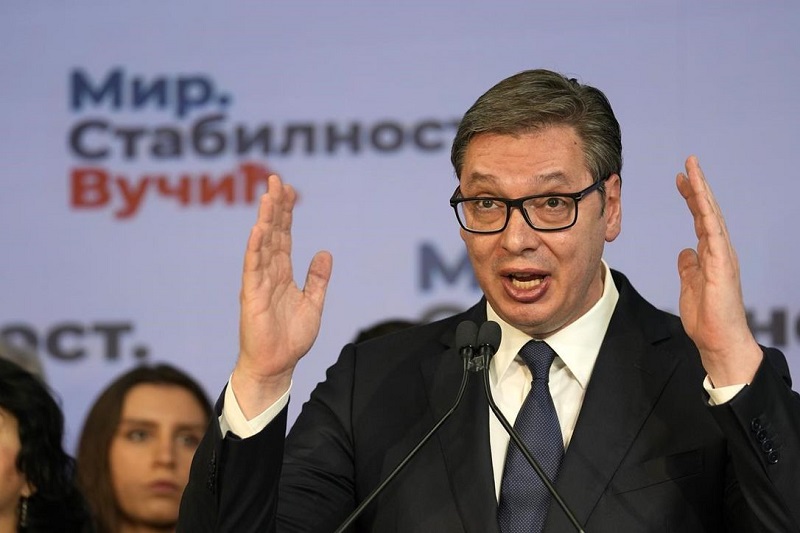 Pollsters like Ipsos and CeSID had predicted that the leader would win 59.8 percent of the votes.

On the other hand, Zdravko Ponos, a retired general representing the centrist and pro-European Alliance for Victory coalition, was forecasted to come second, mustering 17.1 percent of the votes.

Vucic said he felt proud to win a second outright mandate and escape going into a runoff in his victory speech.

“I was to say thank you to Serbia’s citizens,” he said. “I am endlessly happy and endlessly proud.”

The pollsters predicted that Vucic’s Serbian Progressive Party would win the most votes in the parliamentary election on Sunday, with about 43 percent. The SPP was followed by the United for Victory of Serbia opposition group with 13 percent.

A longtime ally of the SNS, the Socialist Party of Serbia, was seen third with 11.6 percent of the votes.

As the SNS would fail to secure a clear majority in the 250-seat parliament to rule alone, it would have to seek coalition partners.

As per the State Election Commission data, turnout stood at 58.54 percent. It was clarified by the commission that they would refrain from making any official announcements on the total count before Monday.

Vucic ran for a second five-year term, promising peace and stability just as Putin invaded Ukraine on February 24. The invasion has put Serbia under Western pressure to choose between its ties with Moscow and aspirations to work with the European Union (EU).

Vucic said the conflict in Ukraine affected his campaign, adding that Serbia had no plans to deviate from its balance between the EU membership bid and ties with Russia and China, a significant investor.

“The Ukrainian crisis’ influence on the election results was very significant,” the president said.