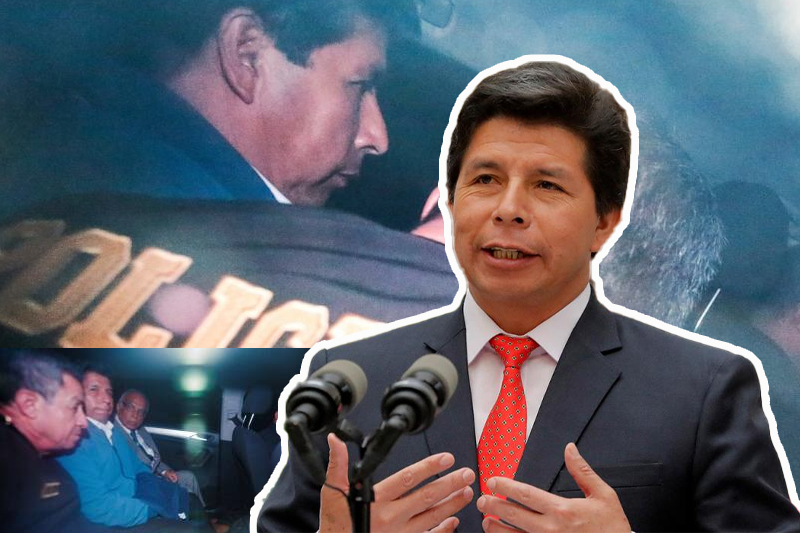 Peru’s president, Pedro Castillo, has been effectively removed from office, impeached and has been detained on charges of “rebellion” against the country. Castillo had announced of shutting down Peru’s congress and installing a “government of exception”, few hours before he was scheduled for facing an impeachment vote.

Peru’s public prosecutor’s office, on Wednesday late night had confirmed that Castillo had been “arrested and charged with allegedly breaching constitutional order, after he was accused of an attempted coup and seen fleeing the presidential palace”. The arrest was made shortly after Pedro Castillo was impeached by the voting in Congress. The vote came after the former president had ordered a night time curfew and the reorganization of the office of judiciary and prosecutor. The said offices are investigating Castillo for alleged corruption and influence trafficking, the charges which he rejects.

Shortly before becoming the new President of Peru, vice president Dina Boluarte had described the move by Castillo as a “coup attempt”. Boluarte has become the first female president of Peru in history. Calling for a political truce and formation of a national unity government, new president said, “What I ask for is a space, a time to rescue the country.”

The announcement by Castillo of shutting down Congress temporarily was met with huge rejection from his cabinet, triggering mass resignations. “I strongly condemn this coup d’état and call on the international community to assist in the democratic re-establishment of democracy in Peru,” tweeted the foreign minister, César Landa, as he announced his resignation. “Castillo took this decision without my knowledge or support.”

“What has happened in Peru is a coup d’état,” said Fernando Tuesta, a political science professor at Lima’s Pontifical Catholic University. “Nothing announced by former president Pedro Castillo is allowed by the constitution.”

The U.S. Embassy in Lima too has condemned Castillo’s move. “The United States emphatically urges President Castillo to reverse his attempt to close Congress and allow democratic institutions in Peru to work according to the constitution,” the embassy said in a tweet. “We encourage the Peruvian public to stay calm during this uncertain time.”

With this high drama, Castillo’s tumultuous 17 months in power have come to an end. The presidency of Castillo had already seen five cabinets comprising of over 80 ministers, six criminal investigations and two attempts to impeach him that had failed.