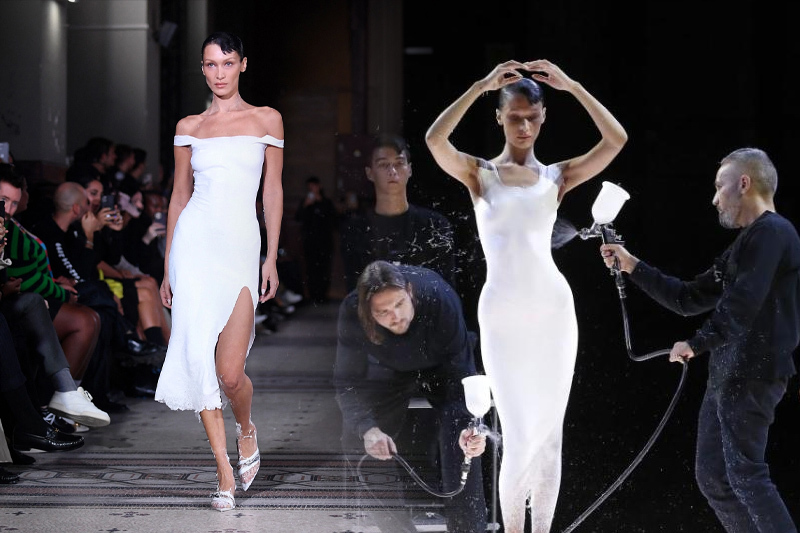 Supermodel Bella Hadid walked the Coperni Womenswear Spring/Summer 2023 runway on Friday during Paris Fashion Week wearing a spray-on costume that was essentially made particularly for her.

“Bella Hadid x some McQueen fashion nostalgia at Coperni Spring 2023. What a moment,” the caption reads.

The now-viral video depicts Ms. Hadid walking down the runway initially topless and with her hands covering her breasts. She had her hair tied up in a beautiful updo and was only sporting a pair of nude thongs and slip-on shoes.

The well-known model is also shown in the movie getting her body spray painted by two artists and having a futuristic Coperni slip dress sprayed over her for the show’s grand finale. They purposely poured a thick layer of opaque white latex all over the model’s body as she steadily stood and adjusted her arms.

Later, before Ms. Hadid exited the stage to wrap up the fashion show, a solid, mid-length dress with a thigh-high slit and off-the-shoulder sleeves materialised and was delicately draped.

The video has more than 3.2 million views, more than 2.4 lakh likes, and is still growing in popularity just a few hours after being shared. When they saw her on the show, fans went crazy and wrote a tonne of comments in the post’s comment box.

A user stated, “Why did I assume that this was just some body paint when suddenly it was an entire freaking garment! What in the world!”

The hand-blown glass handbag that made the firm famous in April was worn by Kylie Jenner and Doja Cat, who are both known for their daring fashion choices, according to Page Six.