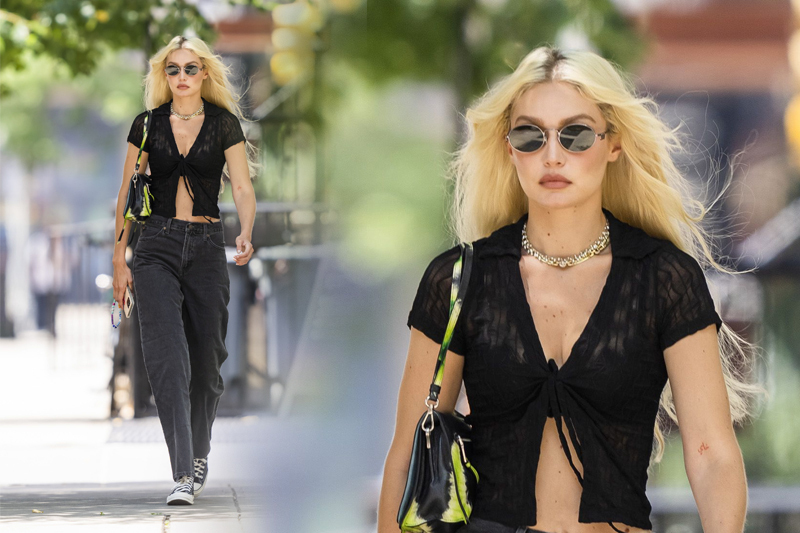 Summer’s sheer trend was given a grunge-inspired twist by Gigi Hadid. After previously sporting a vibrant monochrome look and an almost Barbie-like pink ensemble, she opted to wear a variety of black tones for her most recent outing.

On Friday, Gigi was spotted in New York City wearing a see-through black cardigan by Princess Polly. The top had a more cropped appearance, reaching an area just above Gigi’s waist. The front was likewise connected to the back. She was wearing a black bra under her top.

Gigi complemented her denim and black shirt wonderfully. Her black jeans were faded and ill-fitting; she looked like she’d worn them out. She wore circular eyeglasses and Converse sneakers to add a smattering of grunge to her outfit. In addition, she wore a large necklace and a black and green striped bag.

Gigi is the latest star to embrace the sheer trend for the upcoming season. Florence Pugh recently sported a see-through Valentino gown, and if you haven’t noticed, see-through clothing is a huge trend right now. A sheer bandeau top was seen on Gigi’s sister Bella, while Kendall Jenner paired her see-through dress with a rainbow of colorful swimsuits.

There’s still plenty of time for a last-minute DIY project even though summer is drawing to a close. Sheer dresses worn over swimsuits and sheer tops worn with bralettes are just a few ways to rock the style. It’s possible to have both of these things at the same time. A sheer bodysuit paired with denim may also be an option.