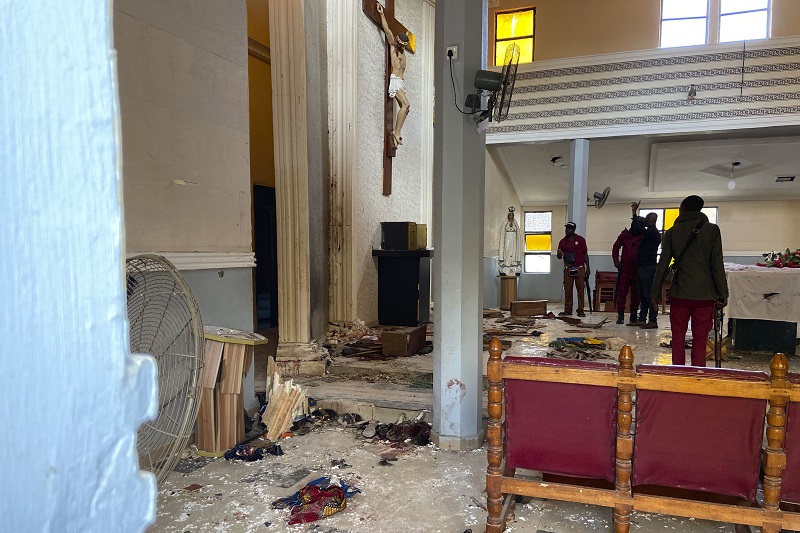 Ondo state’s catholic church was witnessing usual Sunday mass when gunmen turned the scene quickly into a bloody scene. Nigeria’s church witnessed a “satanic attack” as more than 50 people were killed and dozens were left injured.

The armed men targeted the Owo town’s St Francis Xavier Catholic Church as the worshippers had gathered on Pentecost Sunday, said the local officials. The attackers gunned down parishioners and detonated an explosive device, according to local media’s report.

According to the doctors, local officials and volunteers have reported that the death toll is at least 50, and dozens are being treated in local hospitals for injuries. The dead people include many children, said state legislator Ogunmolasuyi Oluwole.

Sunday Ajibola, a volunteer at one of the hospitals in town, said he saw “nothing less than 50 dead bodies” and “several others with injuries from bullets and explosives being treated by medics”. He added, “ Local hospitals are making urgent appeals for blood.”

Videos being circulated on the social media show the bodies of people in church lying in blood pool as people around them wailed in agony.

Governor of Ondo state, Arakunrin Oluwarotimi Akeredolu, has condemned the “vile and satanic attack” on innocent church worshippers. Rev Augustine Ikwu, a secretary of the Catholic Church in Ondo, said, “We turn to God to console the families of those whose lives were lost.”

Nigeria’s president, Muhammadu Buhari said, “No matter what, this country shall never give in to evil and wicked people and darkness will never overcome light.” Buhari’s government has currently been under criticism for ignoring the rise in insecurity and violence in Nigeria.

Adeyemi Olayemi, a lawmaker in Ondo, said the attack is considered to have been inflicted by ethnic Fulani terrorists, also referred to as bandits. They have staged ruthless attacks mainly in northern Nigeria as well as in other parts of the African country.