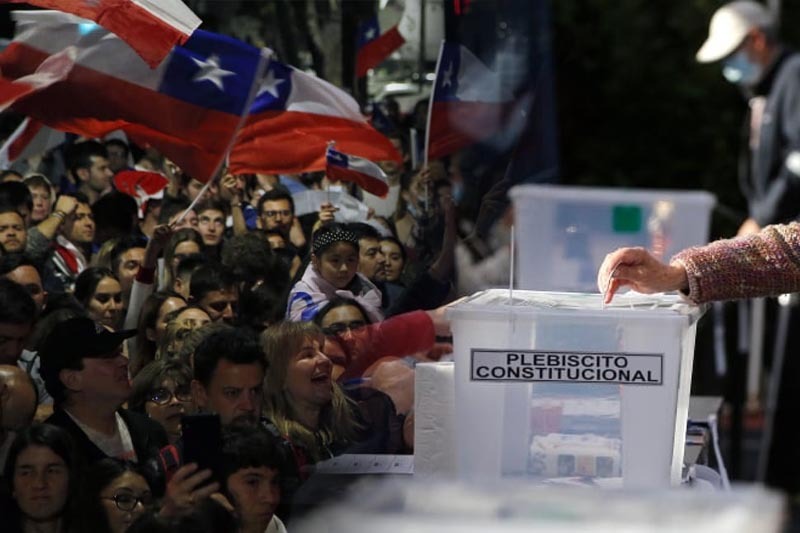 Voters in Chile have overwhelmingly voted against a new, progressive constitution which had been drafted to replace the 1980 document that was written under General Augusto Pinochet’s dictatorship. In Sunday’s plebiscite, 99.9 per cent votes had been counted with the rejection camp having 61.9 per cent support as compared with 38.1 per cent for approval to the new constitution in an election that had mandatory voting.

Senator Ximena Rincón, one of the leaders of the rejection campaign, has described the victory as “clear and emphatic”, and has called for organization of a new constitutional convention. The “approve campaign” has accepted the overwhelming defeat. The South American country’s 36 year old president, Gabriel Boric, has called for a meeting of party leaders on Monday morning at the presidential palace, La Moneda. “I commit to put my all into building a new constitutional itinerary alongside congress and civil society,” said Boric in a televised address to the country as he confirmed of scheduled meeting for Monday morning with the heads of political parties and both chambers of the Congress.

The 1980 document that was written under General Pinochet will remain in force now, casting shadow of uncertainty over Chile’s future. In 2020, 80 per cent of voters had called for drafting of a new constitution. But still under discussions and no agreement reached, people have expressed their lack of confidence over the new document. “The proposed constitution included a long list of social rights and guarantees that had appeared to respond to the demands of that vast social movement”. It also included gender parity across government, for the first time in the world, and gave priority to the measures to protect environment, for the first time recognizing Indigenous people of Chile.

“This is a badly written constitution,” said Carmen Fuentes, 61, who cast her vote in a wealthy north-eastern suburb of Santiago. “There’s been a division in this country for a long time, and this plebiscite won’t change that.” People have been critical of the document’s guarantees and priorities for Indigenous people, citing this would divide Chile.