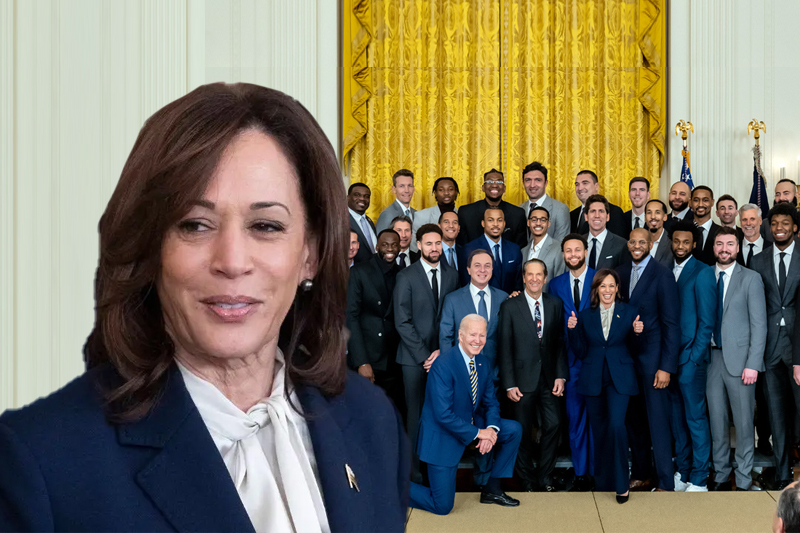 kamala harris declines to kneel with biden during the photo opportunity

Kamala Harris declines to kneel with Biden during the photo opportunity

This week, the White House planned an event to honour the top basketball team in the country, but things went wrong. Vice President Kamala Harris said, “I’m not doing that,” after US President Joe Biden dropped down on one knee to pose with the Golden Star Warriors.

On social media, the incident’s footage has gone viral. Fox News said that Biden and Harris were debating how the picture would be shot. Harris objected as the President bent down to prostrate himself.

In the now-viral video of the event on Tuesday, the US Vice President can be heard saying, “I’m not doing that.”

As the US President kneels, the basketball team’s coach can be heard yelling, “No,” even waving him off with his right hand. But Biden grinned and went on.

While the pictures were being shot, Harris walked in between Warriors star Steph Curry and seasoned player Andre Iguodala, according to the Fox News report.

After the picture was taken, Biden got to his feet and stooped down, as shown in the video. Meanwhile, the basketball team encouraged them.

According to The New York Post, the president, who is prone to gaffes, struggled to pronounce Harris’ name throughout his speech.

Meanwhile, Harris’ gesture received a lot of feedback on Twitter.

One user commented, “The nation is in such good hands.” Another person said, “Warriors are happy to meet the worst administration of our lifetime, but they won’t go while Trump is in office…weakest team in sports.

The Warriors, who skipped these ceremonies in 2017 and 2018 due to Trump’s presidency, visited the White House to honour their most recent NBA Championship victory.