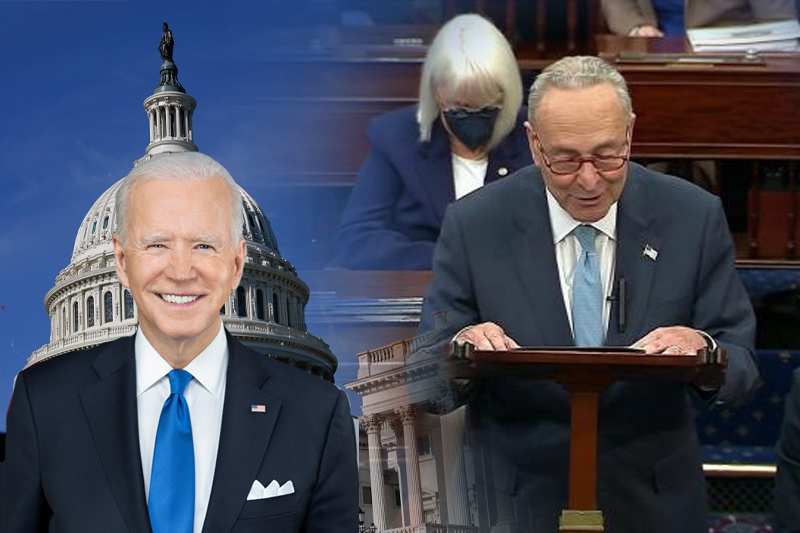 In a big win for President Joe Biden and his administration, all efforts by Democrats to push the economic package in Senate have come through. On Sunday afternoon, the Senate passed $750 billion bill including critical agendas of tax, healthcare, and climate. The final party-line vote was 51-50, with the tie dissolved by Vice President Kamala Harris. The product of relentless negotiations, this package’s approval would give Democrats an opportunity to achieve major policy objectives ahead of the midterm elections.

The estimated $740 billion package will now be tabled in House for approval, where lawmakers are all set to pass the bill into law stamping Biden’s vision. This is a stunning victory for Biden administration, considering the bill was more of a lost effort that has now brought life to Biden’s presidency. “Today, Senate Democrats sided with American families over special interests,” President Joe Biden said in a statement from Rehoboth Beach, Delaware. “I ran for President promising to make government work for working families again, and that is what this bill does — period.”

President Biden has now urged the House to pass the bill without further delay. Speaker Nancy Pelosi said House, which is expected to vote on Friday, would “move swiftly to send this bill to the president’s desk.”

The Inflation Reduction Act marks the largest investment made by United States in the climate sector. The legislation would spend more than $430 billion to reduce carbon emissions, bolstering the climate goals set by the Biden administration.

The legislation will put a cap on out-of-pocket drug costs for senior citizens on Medicare to limit of $2,000 a year. Furthermore, there would be an extension in expiring subsidies that is projected to help 13 million people to afford health insurance, under the Affordable Care Act.

The legislation would also reduce the deficit, which will be paid for through new taxing system. This includes a 15 per cent minimum tax on large corporations and a 1per cent tax on stock buybacks. This is projected to boost the collection abilities of Internal Revenue Service (IRS).

West Virginia Democratic Senator Joe Manchin has called the bill “a good balanced bill”. “I think we’ll all benefit from it; the country will. We have energy security, that’s what we were looking for. And we have the ability to invest in the energy of the future,” he said.