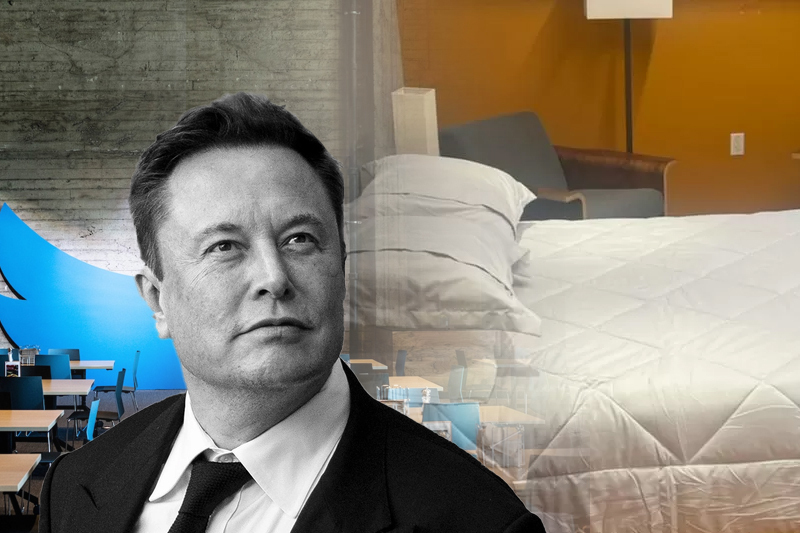 San Francisco has opened investigations into Twitter following a complaint, and leak of pictures, that showed the company under directives of its new owner Elon Musk has turned the rooms in its San Francisco headquarters into sleeping rooms, alias bed rooms.

Few employees told Forbes that as of Monday, “the office has modest bedrooms featuring unmade mattresses, drab curtains and giant conference-room telepresence monitors with four to eight beds a floor”. The transformation appears to be a part of Musk’s planning of a “hardcore” work culture at Twitter as he had “demanded” the employees dedicate “long hours at high intensity” after he had fired almost half of the company’s global workforce.

Esther Crawford, a Twitter employee, had shared a photo last month of her sleeping in the office with an eye mask and sleeping bag. “When your team is pushing round the clock to make deadlines sometimes you #SleepWhereYouWork,” Crawford had tweeted.

When your team is pushing round the clock to make deadlines sometimes you #SleepWhereYouWork https://t.co/UBGKYPilbD

The San Francisco Department of Building Inspection has confirmed to have opened an investigation into the matter after it received a complaint. It added that the department would be inspecting the headquarter of Twitter. According to the report by San Francisco Chronicle, Twitter has not applied for the required permits to use “parts of building for residential purposes”.

“We need to make sure the building is being used as intended,” a department spokesperson, Patrick Hannan, told the Washington Post. “There are different building code requirements for residential buildings, including those being used for short-term stays. These codes make sure people are using spaces safely.”

NEW: The BBC has obtained pictures of inside Twitter – rooms that have been converted into bedrooms – for staff to sleep in.

The city of San Francisco is investigating as it’s a commercial building. pic.twitter.com/Y4vKxZXQhB

Musk, as expected, has been critical of the investigation. “So city of SF attacks companies providing beds for tired employees instead of making sure kids are safe from fentanyl. Where are your priorities @LondonBreed!?” he said on Twitter with a link to an article “detailing an account from a father who says his baby overdosed on fentanyl after being exposed to the drug at a city playground”.

So city of SF attacks companies providing beds for tired employees instead of making sure kids are safe from fentanyl. Where are your priorities @LondonBreed!?https://t.co/M7QJWP7u0N

In pictures received by BBC, the rooms turned into bedrooms at Twitter office, with employees calling them as “hotel rooms”. Few Twitter employees have also shared that Musk regularly sleeps at the Twitter HQ.