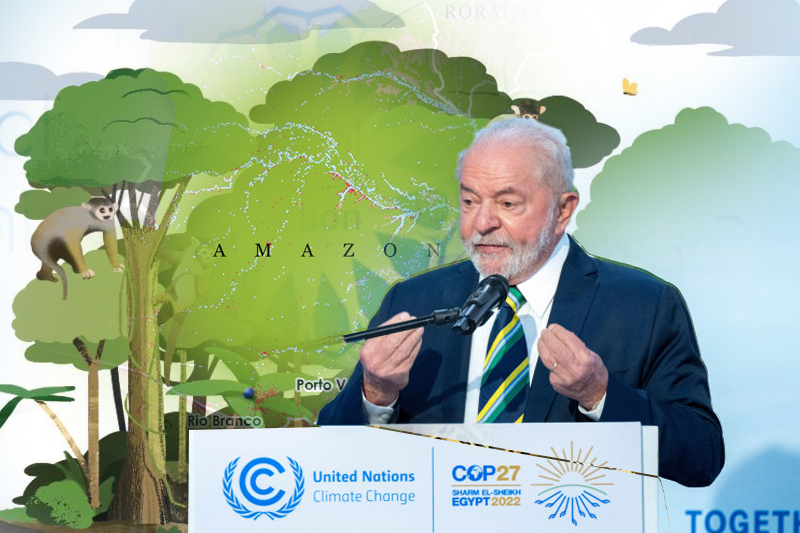 “Brazil is back”! These were the words of Brazilian president elect Luiz Inácio Lula da Silva as he addressed the Cop27 in Egypt. Lula has vowed to bring a complete stop to deforestation of Brazil’s Amazon rainforest and reverse the resultant degradation of environment which was rampant under former far right Brazil’s president Jair Bolsonaro.

In his first overseas big speech since winning the presidential election, Lula said “Brazil did not need to clear another hectare of rainforest to be a major agricultural producer”, adding that during his presidency he will demand that “rich countries deliver on their promise of $100bn of climate finance for developing countries and to create a fund for loss and damage compensation”.

“Today, I am here to say that Brazil is ready to join once again [the] effort to build a healthier planet. Brazil has just ended elections, one of the most decisive in its history. It was followed in an unprecedented way by other countries. It could help control the rise of the authoritarian right and climate deniers around the world,” Lula said, bringing the much needed hope to Cop27.

Detailing the widespread and extreme consequences of climate change, Lula said, “In the US, they live with tropical storms and more and more powerful hurricanes … In Brazil, which is a forest and hydrological power, we experienced drought and devastating floods. Europe faces extreme heat with fires and unprecedented deaths. And although it is the continent with the lowest greenhouse gas emissions, Africa has drought in Chad, Kenya and Somalia. I repeat: nobody is safe.”

“The planet warns us at every moment that we need each other to survive. Alone we are vulnerable to the climate tragedy. Nevertheless we ignored these warnings … We have spent trillions of dollars that only result in destruction and death. We experience a moment where we have multiple problems: nuclear war, crisis of food supply, energy, erosion of biodiversity, inequality … These are hard times. But it was always in difficult times that humanity overcame challenges. We need more confidence,” he said.

Lula also stressed in his address that the global fight against climate change requires partnerships and cooperation. He laid emphasis that he will be working with other Amazonian countries – Peru, Colombia, Venezuela and Guyana – to work together for sustainable development and protecting the critical ecosystems.