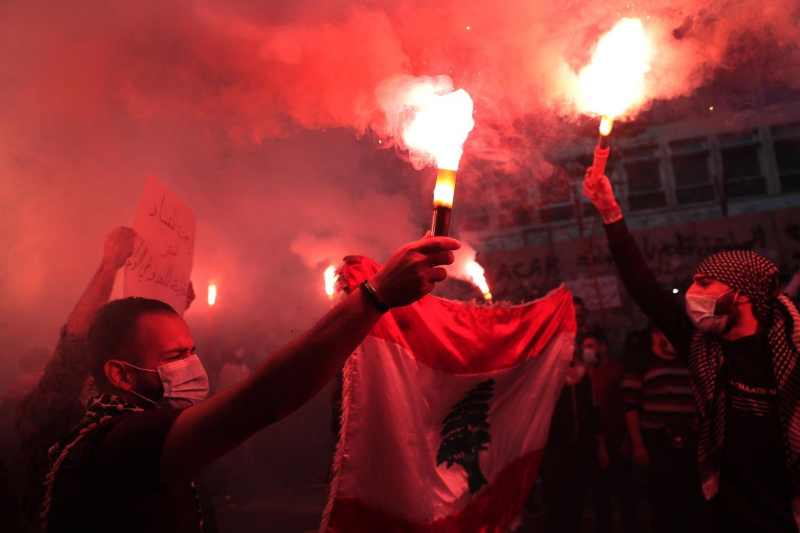 In an unprecedented development, protests broke out across several parts of Lebanon on Tuesday, after the local currency (Lebanese Pound) hit an all-time low. Amid the ongoing political crisis, the local currency hit a record low as the dollar traded at 10,000 Lebanese pounds on the black market on Tuesday.

Hundreds of demonstrators took to the streets and chanted slogans across several cities in the country to protest the failure of politicians to rescue the collapsing economy. Protesters across Beirut, Tripoli, Sidon, and other cities blocked roads and highways, set tires on fire, and raised chants to demand the formation of a new government.

Responding to the situation, Lebanese President Michel Aoun took to Twitter and said that he had asked the Central Bank Governor to conduct an inquiry into the reasons behind the sudden fall in the local currency.

Politicians have not been able to agree on a new government since the resignation of Hassan Diab’s cabinet in the wake of the Beirut port blast on August 4, 2020. There have been no meetings or communication between Lebanese President Aoun and Prime Minister-designate Saad Hariri to resolve the deadlock over the formation of the new Cabinet in order to carry out the much-needed reforms. With Hariri holding on to his position to form a government of 18 ministers, the political crisis has entered its eighth month.

At the same time, the government-led by caretaker Prime Minister Saad Hariri has not been able to negotiate a plan to allow foreign aid from the International Monetary Fund (IMF), World Bank and other donors to support the plummeting economy. Lebanon’s talks with IMF for a $10 billion economic bailout package in May 2020 were stalled due to differences in the two sides representing the government and the Lebanese banks.

Lebanon has been struggling with political instability since the resignation of Saad Hariri in October 2019 in the aftermath of widespread anti-government protests the corrupt ruling elite. Prolonging economic and financial deterioration has resulted in declining job opportunities, poverty and hunger among the most-affected sections of society. Lebanese population is grappling with increasing prices of basic consumer goods such as cereals and diapers.

Last month, Lebanon launched its COVID-19 vaccination campaign with inoculation of healthcare workers and senior citizens with the aim of mitigating the unprecedented spike in Coronavirus cases.

The caretaker government has been facing increasing pressure to hold by-elections to fill the vacant positions in the parliament after eight MPs resigned and two died due to COVID-19. Meanwhile, parliamentary elections are slated take place in the crisis-hit country in next year.

Who Has Contributed The Most For Yemen Aid This Year?
MI5 warns of Russians in the UK being targeted by Kremlin, steps up security
Subscribe
Login
0 Comments
Inline Feedbacks
View all comments