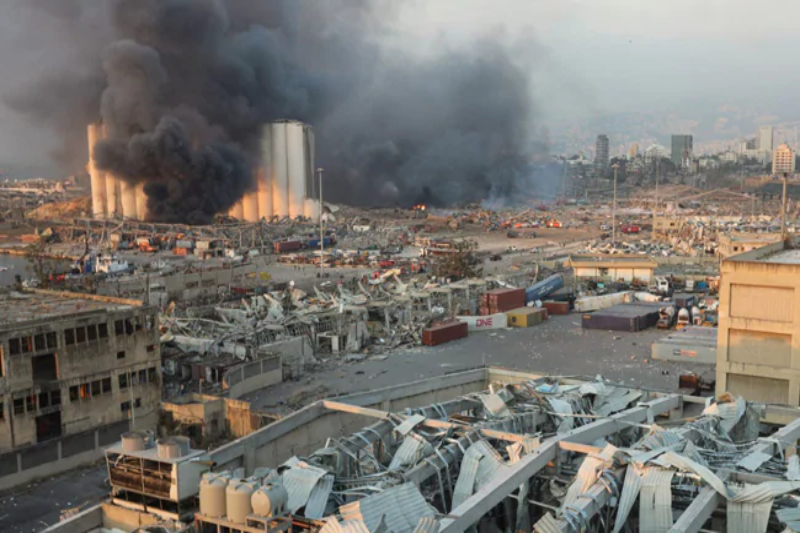 The day when Beirut was rocked with a massive catastrophic explosion killing at least 210 people. The blast on Beirut port was caused by ammonium nitrate that was stored in a warehouse at port. The massive stockpile of military grade explosive fertilizer caught fire six years later and pulverized the main port of Lebanon.

Trauma and loss weren’t new to the city of Beirut, but this blast wrecked havoc and opened new crevices of pain and agony that no resident knew. There was misery all around as where earlier buildings stood tall was covered in rubble and ruins.

One year down, the scar remains raw even though physical damage has been mended. The Lebanese capital is still festering with questions of angered people who have been denied justice still. This day people ask question to leadership why they missed a chance to deliver justice to the people, just once. The lack of justice and closure amplifies dysfunctional leadership of Lebanon.

Judicial enquiries have been attempted in past one year with many leaders and bureaucrats being sacked and detained. But no questioning was done or they refused to answer cashing in on their immunity that protects them from persecution. “The Lebanese state cannot and will not investigate itself,” said Shadi Haddid, a resident of the town of Broumana which is 30 minutes from Beirut. “No one here is competent to sit in judgment of the other.”

Even questions around unsafe storage of ammonium nitrate in hanger remain unanswered. Why were they stored for six years with no assessment? How much was burnt in the explosion? Why was the explosive stored at port and who was the ultimate beneficiary? Was the remaining explosive stockpile removed? All these questions have been ghosted by Lebanon’s leadership that itself is meeting a crisis point.

Private investigators in Lebanon suggest that remaining stockpile might have been moved to Syria for making crude explosives, barrel bombs.

A report by Human Rights Watch says that Lebanese leadership was warned of dangers posed by explosive’s storage at the port. “The evidence currently available indicates that multiple Lebanese authorities were, at a minimum, criminally negligent under Lebanese law in their handling of the Rhosus’s cargo,” the report said. “The actions and omissions of Lebanese authorities created an unreasonable risk to life. Under international human rights law, a state’s failure to act to prevent foreseeable risks to life is a violation of the right to life.”

“In addition, evidence strongly suggests that some government officials foresaw the death that the ammonium nitrate’s presence in the port could result in and tacitly accepted the risk of the deaths occurring. Under domestic law, this could amount to the crime of homicide with probable intent, and/or unintentional homicide.”