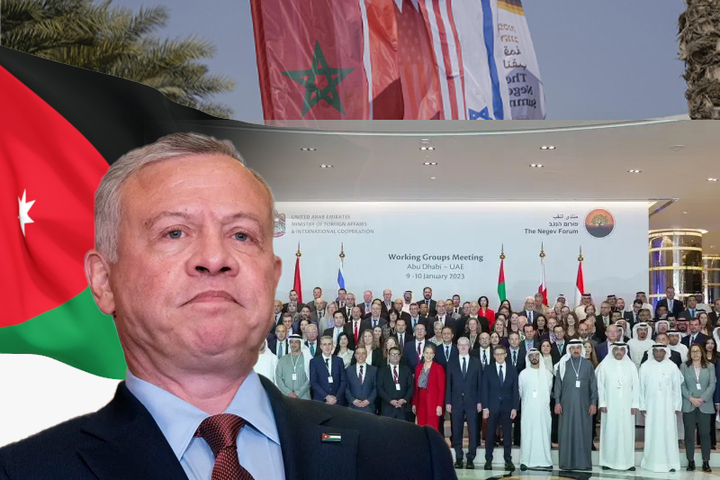 A senior State Department official bemoaned Jordan’s anticipated absence from the next Negev Forum conference of Israel and its Arab allies, which will be held in Abu Dhabi on Monday and Tuesday.

The cooperation began in March with a meeting of the nations’ foreign ministers in the Israeli town of Sde Boker, followed by an in-person meeting in June and a virtual meeting in October of a lower-level steering committee that is managing the numerous projects generated by the forum.

Jordan has remained steadfast in its opposition to joining the Negev Forum so long as the Palestinians will not be participating alongside them, a stance that has led to a dead end due to the Palestinian Authority’s refusal to cooperate openly with an initiative it views as an attempt to marginalize its cause.

“There is an empty place at the table since Jordan definitely has a peace accord with Israel,” a senior US official told The Times of Israel days before the meetings of the working group.

While Israeli officials who talked with The Times of Israel in October expressed confidence that Jordan would participate in the Negev Forum in some capacity — maybe by sending an observer group — the senior US official stated in Abu Dhabi this week that this would not occur.

The relationship between Prime Minister Benjamin Netanyahu and Jordan has always been tense, and his first week back in office was no exception. Last week, Jordan summoned Israel’s ambassador to protest National Security Minister Itamar Ben Gvir’s visit to the Temple Mount and published venomous remarks condemning Israel’s new right-wing government over the move.

Advocates of the Negev Forum believe that Jordan has little to gain by remaining neutral while regional initiatives advance. US Secretary of State Antony Blinken highlighted the subject in a phone chat with Jordanian Foreign Minister Ayman Safadi on Friday. The US remains committed to integrating the Hashemite country into the partnership.

Even though Ramallah is not sending a delegation, the Biden administration will continue to update the PA on developments at the Negev Forum, according to a senior State Department official.

Notably, Palestinian authorities have not denounced the Negev Forum as they did the Abraham Accords normalization accords that Israel signed with the UAE, Bahrain, and Morocco in 2020, which were negotiated by the United States.

Two Arab ambassadors from participating nations stated that the former Israeli government opposed the inclusion of the PA as an equal participant of the forum, despite the fact that the PA did not seek such a position. Netanyahu’s return to power is unlikely to affect Israel’s position, given that the majority of his coalition members oppose a two-state solution and have demonstrated less interest in collaborating with the PA.

However, according to the senior U.S. source, the working groups would strive to push projects that will grow the Palestinian economy and improve the living conditions of Palestinians. “It is possible that you will see initiatives that are not especially aimed at the Palestinians, but rather regional projects that [the Palestinians] will be able to profit from in the same way as the other nations participating in [the forum].”

The official underlined that the Negev Forum “is not a replacement for work on the Israeli-Palestinian front” – a view held by the Biden administration for a considerable amount of time.

While the current Israeli administration has declared a willingness to continue up where the previous government left off in furthering regional integration efforts, it may be difficult to do so if it simultaneously advances some of its guiding principles, such as strengthening Israel’s presence in the West Bank.

The senior State Department official declined to comment on the potential impact of such attempts on the Negev Forum, but stated that “our Arab allies would be keenly observing” how Netanyahu’s coalition governs.

Each of the other five Negev Forum nations denounced Israel over Ben Gvir’s journey to the Temple Mount, but an Israeli Foreign Ministry official stated last week that the incident had no effect on preparations for the Abu Dhabi meetings.

The senior State Department official described the Negev Forum as a “natural next step in terms of trying to leverage some of these normalization agreements and advance initiatives and projects that enhance regional integration, which will benefit everyone, including the Palestinians,” in addition to the differences between Israel and other members.

Concerning the expansion of the Negev Forum to include other Arab nations, the State Department official refused to provide specifics, but said that the Biden administration’s “objective is to make this a club that others want to join. I hope that more will join this forum in the future because they will realize what a successful and valuable endeavor this is.”

Given that the different members perceive Iran as a danger to the region, attempts to fight the Islamic Republic’s influence will undoubtedly be discussed in Abu Dhabi this week. However, the State Department official played down the significance of the problem at the working group sessions, stating, “The objective of our endeavor is to foster regional integration, prosperity, and peace. It is not an alliance against Iran.”

The US delegation will be led by State Department Counselor Derek Chollet and will consist of around 40 officials from the State, Defense, Commerce, Energy, and Health departments, as well as the Environmental Protection Agency and others.

The Israeli delegation will consist of around twenty individuals, led by Alon Ushpiz, director general of the Foreign Ministry.

Once the plans proposed by the working groups are operational, according to a senior State Department official, the Negev Forum will conduct its second ministerial conference, this time in Morocco, which will take over the rotating presidency from Israel. The Morocco ministerial meeting is anticipated to occur in the first half of 2023, although no date has been established. It will likely be a topic of discussion when the Negev Forum’s steering committee meets for a third time this week in Abu Dhabi, alongside a working group meeting.

Jordan retains its opposition to joining the Negev Forum as long as the Palestinians do not also participate, a stance that has led to a stalemate due to the Palestinian Authority’s unwillingness to publicly engage with a program it views as an attempt to marginalize his cause.

The relationship between Prime Minister Benjamin Netanyahu and Jordan has always been strained, and his first week back in office was no exception. Amman summoned Israel’s ambassador last week to protest National Security Minister Itamar Ben Gvir’s visit to the Temple Mount and published venomous comments condemning Israel’s new right-wing government over the decision.

Supporters of the Negev Forum believe that Jordan has nothing to gain by remaining on the sidelines as regional initiatives continue to flourish. Friday, US Secretary of State Antonia Blinken called Jordanian Foreign Minister Ayman Safadi to discuss the inclusion of the Hashemite Kingdom in the collaboration. The United States is not given up on this goal.

Notably, Palestinian authorities have not opposed the Negev Forum in the same manner they have opposed the 2020 Abraham Accords normalization agreements sponsored by the United States and signed by Israel, the United Arab Emirates, Bahrain, and Morocco.

Two Arab ambassadors from participating nations stated that the former Israeli administration opposed the inclusion of the PA as an equal participant of the forum, despite the fact that the Palestinians did not seek such a position. Netanyahu’s return to power is unlikely to result in a shift in Israeli policy, given the majority of his coalition is hostile to a two-state solution and has showed less interest in collaborating with the PA.

Nonetheless, according to the senior American official, the working groups would strive to push initiatives that will increase the Palestinian economy and improve Palestinian living conditions.