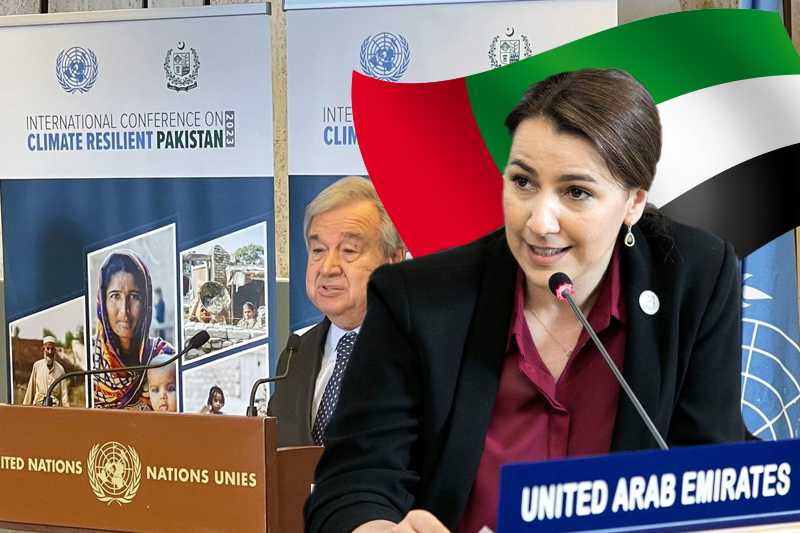 UAE delegation in Geneva, vows to provide global support to countries in need

Muhammad Shahbaz Sharif, the Prime Minister of Pakistan, and Antonio Guterres, the Secretary-General of the United Nations, attended the international conference that was held in Geneva today to discuss mechanisms for mobilising international support for those in need.

Notably, the Minister of Climate Change and the Environment, Maryam bint Muhammad Al Muhairi, led the delegation from the United Arab Emirates.

In her remarks at the conference, Maryam Al Muhairi stated that the UAE supports all global initiatives to improve emergency relief, rehabilitation, reconstruction, and prevention in the wake of the unprecedented floods that ravaged Pakistan in 2022.

She also noted that the humanitarian response in this regard came to meet urgent needs and reach areas. stricken and affected areas to ensure access to the basic needs of the population and improve their living conditions.

She mentioned that the provision of humanitarian relief is a crucial component of the state’s foreign policy approach, as it was one of the first nations to respond to the crisis and hastened to inaugurate a bridge Air and sea, which included the dispatch of 71 aircraft and 6 ships with medical supplies.

She continued, “Extending a helping hand to those affected, and ensuring that all forms of food and medicine supplies and basic needs are sent are among the firm values of the state since its inception.”

She mentioned that Pakistan received aid from the UAE totalling more than $2.4 billion over the previous five years, including more than 647 million doses of the polio vaccine given to 119 million children between 2014 and 2022, for which $53 million has been set aside. As part of the Global Polio Eradication Initiative, the vaccine campaign will be continued from 2023 through 2026.

The UAE is committed to advancing efforts to mobilise international efforts in addressing climate challenges as part of its readiness to host the Conference of the Parties to the United Nations Framework Convention on Climate Change at its twenty-eighth session, or COP28, this year, which is an opportunity to collaborate closely, the Minister of Climate Change and Environment said at the conclusion of her speech.

Through a comprehensive strategy that considers the interests of developing countries that suffer from the effects of climate change, including Pakistan, it is possible to achieve a faster recovery and increase flexibility in dealing with future challenges. This can be done by working with the international community to find effective and sustainable solutions to mitigate climate change while prioritizing economic growth.