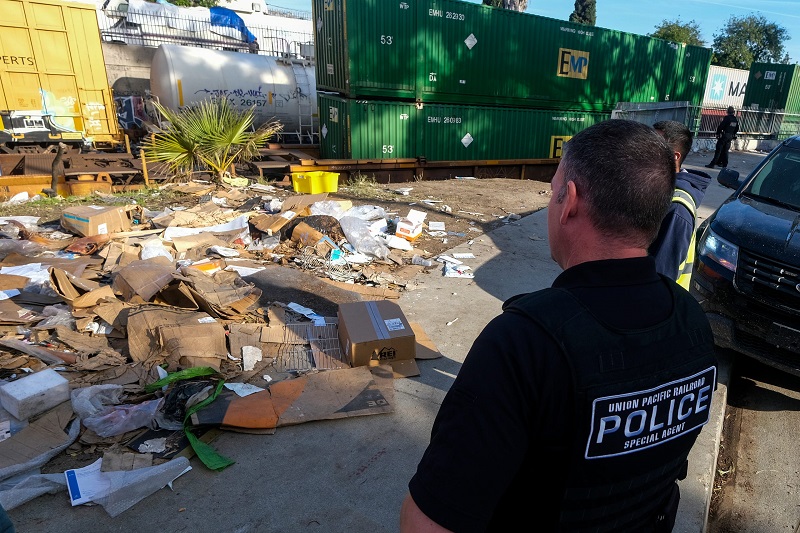 Los Angels – Dozens of freight cars are the go-to point of thieves of Los Angeles, who latch onto the rail tracks to loot packages bought online.

Every day, they leave thousands of gutted boxes that never reach their destinations.

The thieves wait until the freight trains are immobilized and then climb onto the containers, whose locks are easy to break with bolt cutters.

Many major US courier and mail order companies such as Target, Amazon, FedEx, and UPS are being hit by the thefts – which have surged in recent months.

The robbers helped themselves to parcels, destroying products that are difficult to resell or move or are cheap, such as furniture, Covid-19 test kits, or medications.

“In October last year, the increase was 356 percent compared to the corresponding month of the previous year,” UP said.

The surge in looting has been backed by an upsurge in “armed robberies and assaults of UP employees, who are on duties in moving trains,” the Union said.

The phenomenon increased recently with the peak of activity linked to Christmas shopping.

As per figures reported by UP, about 90 containers were vandalized each day on average in Los Angeles in the last quarter of 2021.

Union Pacific says it strengthened surveillance measures and recruited security staff for its convoys and tracks to meet the challenge.

Police have arrested 100 people in the last months of 2021 for “vandalising and trespassing” Union Pacific trains.

A spokesman for the rail operator said when criminals are arrested, charges are reduced to a misdemeanour or petty offence, and the accused is back on the streets in 24 hours after paying a nominal fine.”

“Criminals boast to our officers that they would not face any consequences,” he said.