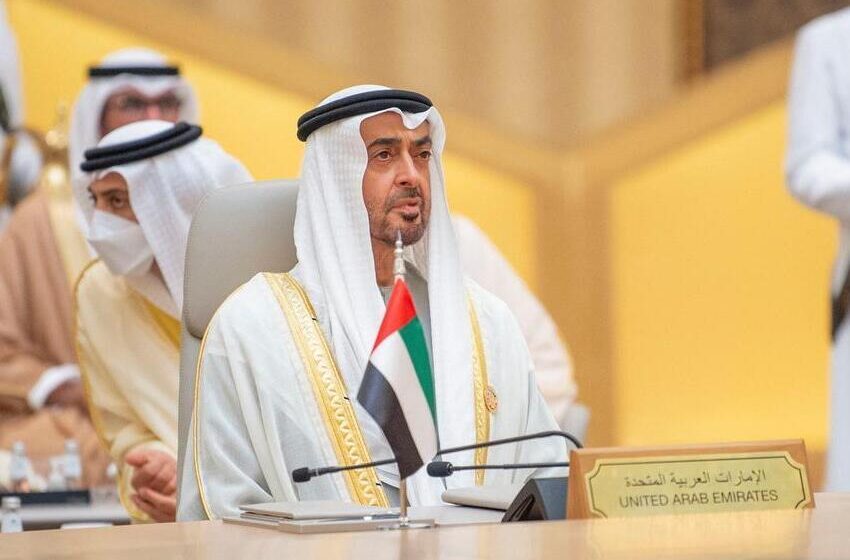 President His Majesty Sheikh Mohamed bin Zayed Al Nahyan will attend the 27th session of the Conference of the Parties to the United Nations Framework Convention on Climate Change (COP27) in the Arab Republic of Egypt.

The conference will be attended by world leaders, heads of government, and members of international organizations and civil society who will engage in constructive discourse aimed at combating climate change.

His Majesty Sheikh Mohamed will lead a high-level delegation at the conference, which offers the UAE the chance to strengthen existing ties for sustainable development and support worldwide climate action initiatives.

Sunday marks the beginning of the COP27 climate meeting in Sharm El Sheikh, Egypt, amid mounting calls for affluent countries to compensate poorer nations that are most vulnerable to climate change. At the summit, representatives from around the world will engage in the yearly deliberations on climate change.

At COP27, diplomats from more than 130 nations are anticipated to advocate for the establishment of a loss and damage funding institution.

According to Reuters, COP27 will likely focus heavily on loss and damage — compensation monies granted by wealthier nations to vulnerable low-income states who bear little blame for climate-warming emissions.

The delegates will begin the two-week negotiation process by approving the conference agenda during the opening plenary session, with all eyes on whether or not the wealthier nations would agree to the inclusion of compensation on the agenda.

The summit is anticipated to have one of the greatest numbers of delegates at the annual global climate conference, which runs from November 6 to November 18 in Sharm El Sheikh, Egypt.

Ambassador Wael Aboulmagd, Special Representative to the COP27 President, stated before to the summit, “The Egyptian Presidency team has worked diligently to create an environment conducive to fruitful negotiations. As hosts of the COP, we are eager to attract representatives of states and stakeholders from around the globe and to offer the necessary impetus for addressing the necessary activities for the prompt and widespread implementation of climate commitments and pledges.”

During COP27, the Sharm El Sheikh International Convention Center (SHICC) will serve as the Blue Zone.

The Blue Zone is where all delegate conversations are scheduled to take place.
In addition, a comprehensive list of dynamic events, featuring young advocates and scientists, will be arranged by governments and recognized observers.

The corporate community, youth, civil society, academia, and artists from all over the world will have an additional space to participate in a 22,500 square meter Green Zone.

Through events, exhibitions, seminars, cultural performances, and discussions, it seeks to encourage open and dynamic dialogue and involvement among climate actors.

On November 7-8, the Sharm El Sheikh Climate Implementation Summit will convene with all participating heads of state and government.

After the summit’s opening ceremony, a number of roundtables will be held to discuss six important topics: Just Transitions, Food Security, Innovative Finance for Climate and Development, Investing in the Future of Energy, Water Security, and Climate Change and the Sustainability of Vulnerable Communities.

The COP27 Egyptian Presidency has chosen six significant thematic days that will include panel pledge opportunities, debates, roundtables, and side events in addition to the global negotiations scheduled to take place in Egypt during the conference.

These thematic days are part of attempts to accelerate climate action that can address existing implementation bottlenecks and gaps and improve involvement with youth, women, civil society, and indigenous people at the heart of debates, among others.

Key areas of attention include the promise of innovation and clean technologies, the importance of water and agriculture to the climate issue, biodiversity loss, energy transition, decarbonization efforts, and financing, and the promise of innovation and clean technology. Three days will be devoted to youth and future generations, women and civil society, their contributions, the issues they encounter, the solutions they propose, and how to mainstream their engagement in climate policy planning and implementation.

During its participation in the 2022 Conference of the Parties to the United Nations Framework Convention on Climate Change (COP27), which begins on Sunday (Nov. 6), the UAE will highlight its accomplishments in climate action, energy transition, and diplomatic campaigns to support international climate action, as well as its preparations to host COP28 next year.

The UAE will link the outcomes of COP27 and COP28 to support climate action and raise awareness of its visions and efforts to achieve sustainability through its close collaboration with Egypt.

The United Arab Emirates has a long history of climate action accomplishments, which it views as a chance to help develop practical solutions to this global challenge that affects everyone, in accordance with its aspirations to diversify its economy and improve the skills of its youth.

The United Arab Emirates is one of the world’s greatest givers of humanitarian relief and provides direct assistance during climate-related disasters and conflicts, the effects of which are amplified by climate change. In 2015, the nation was the first in the region to sign and ratify the Paris Agreement and to declare a 2050 climate neutrality strategy.

In accordance with the Paris Agreement, COP21 member states must adopt stringent climate regulations by 2015.

The ultimate objective of the United Nations Framework Convention on Climate Change (UNFCCC) is to stabilize greenhouse gas concentrations in the atmosphere, prevent dangerous anthropogenic interference with the climate system, and promote sustainable development.

The annual Gathering of the Parties to the UNFCCC is the largest annual conference held by the United Nations (UN).

The UNFCCC has nearly universal membership with 197 countries and is the parent treaty of the 2015 Paris Agreement, the primary objective of which is to reduce the average global temperature rise this century as close to 1.5°C over pre-industrial levels as possible.