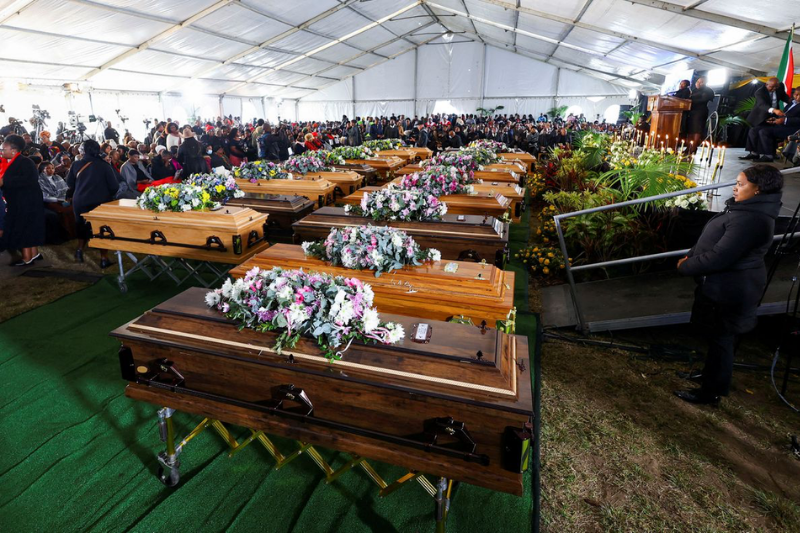 South Africa holds memorial for 21 teens who died in tavern

South Africa holds memorial for 21 teens who died in tavern

Grieving family and friends of the 21 adolescents who died over two weeks ago in a strange nightclub disaster in South Africa’s East London are attending the funeral today.

On behalf of the nation, President Cyril Ramaphosa of South Africa will deliver the eulogy for the young people who have passed away.

A big choir chanted somber hymns as 19 coffins were carried into a large tent where the service was taking place in Scenery Park, East London. In observance of the requests of some families, the caskets on display at the memorial service were empty at the request of the families who were buried privately. Their funerals will take place later today, and throughout this week, they said.

As the capacity of the tent was reached, a significant number of mourners moved to the area outside.

In the Enyobeni tavern, the bodies of 13 to 17-year-olds were uncovered, but the reason for their deaths has not yet been determined. All were under the age of South Africa’s legal drinking age of 18 years old. Using blood samples, pathologists are trying to discover the cause of death. Officers said they rule out a stampede because the victims’ bodies don’t appear to have sustained major injuries in this case.

Some of the locals have decorated the rundown bar with wreaths and flowers, adding to the melancholy atmosphere. The pub has been shut down by the authorities, who are investigating how so many minors were able to gather in an institution selling alcohol after midnight on June 26.

The issue of underage drinking is well-known in the community.

The address that Ramaphosa gave at the service comes at a time when he is facing several challenges, some of which include the prolonged power outages in South Africa, broad allegations of corruption, and questions regarding large sums of cash reportedly found hidden in furniture on his own game farm.

During the funeral service, in addition to Ramaphosa’s eulogy, local choirs will perform hymns, and representatives from the family, as well as religious and community leaders, will give speeches.