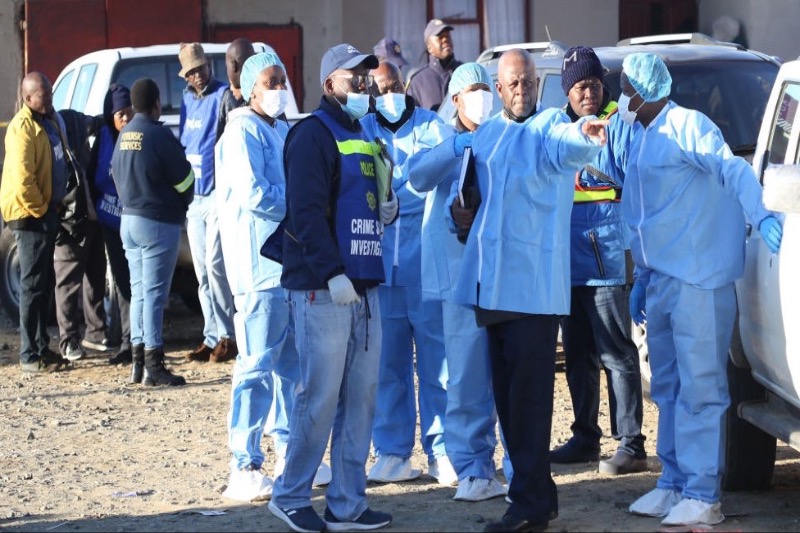 The Enyobeni Tavern crime scene has been investigated by a forensics team to determine exactly what happened there. The bodies of the deceased did not appear to have any apparent injuries; therefore, a crush is unlikely to be the cause of their deaths, according to the authorities.

The poisoning theory has been raised, but it has not been proven. The owners of the tavern in South Africa face criminal charges for allegedly violating licensing agreements, according to the country’s liquor commission.

The families of several of the victims have gathered at the tavern to get the latest information.

Xolile Malangeni was one of them. Sinako, his 17-year-old daughter, escaped from her father’s custody on Saturday night and has never returned.

In an emotional interview with the BBC, her father recalled how she always cared for him when he was ill. “She always loved and took care of me when I was ill,” he said.

According to Police Minister Bheki Cele, the youngest victim was 13 years old, and the oldest was 17 years old; however, a complete list of the victims has not yet been made public. Due to the fact that the legal drinking age in South Africa is 18, they shouldn’t have been permitted entry.

“The venue was packed. The entrance was free, and free alcohol was also being dished out. We started drinking and having fun with others,

Those that were outside were trying to force their way in. Only two bouncers were at the scene to control the crowd. That’s when people started collapsing; they were dropping like flies,

I thought they were just passing out because they had too much to drink. Many others, including myself, escaped through the windows. My friends are dead now, and we’ve all been left traumatized.” a statement from a 16-year-old girl who did not want to be named told the BBC.

Scenery Park township in East London has a densely inhabited neighborhood where the bar, a two-story building, is situated.

Residents say it was the source of a great deal of anger within the neighborhood. In the past, they’d taken their grievances about the loudness and the late hours to the police department.

On Saturday night, there were a lot of young people there, although it’s not clear why. To commemorate the end of school examinations, a “pens down” celebration had been held elsewhere, according to reports in the local press.

The tavern was also hosting a birthday celebration.

Two of the victims died on the route to the hospital or in the hospital, but the other 19 died within the venue.

They were found slumped over tables or lying on the ground.

Promise Matinise, the tavern’s entertainment manager, told the BBC that he witnessed patrons collapsing one by one. Before realizing that some of them were dead, he thought they had passed out from excessive drinking.

Bouncers had previously found it difficult to keep order at the venue, he added.

“Unlimited consumption of liquor” was slammed in a statement by Eastern Cape Premier Oscar Mabuyane, who spoke on Sunday but did not offer any explanations for the fatalities.

“You can’t just trade in the middle of society like this and believe that young people are not going to experiment,” he stated upon seeing the scene.