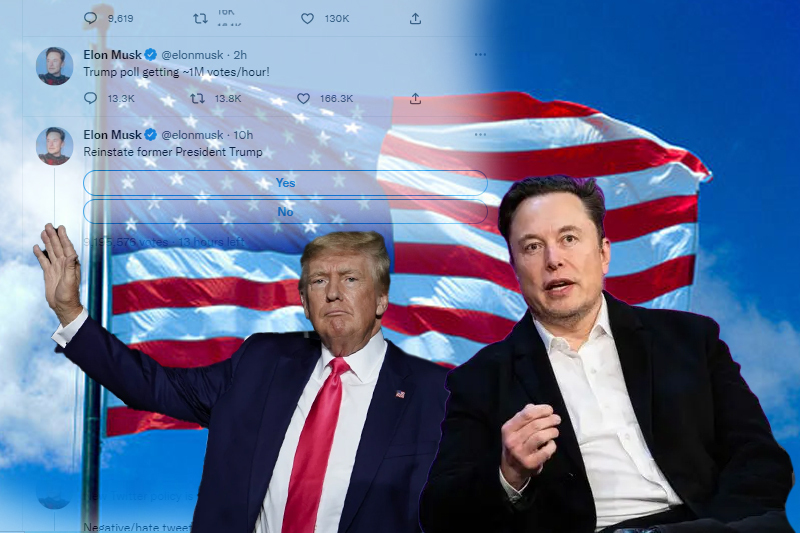 Should Trump be brought back on Twitter? Musk takes a poll on the quintessential question

Elon Musk has started a Twitter poll, open late on Friday asking followers on the platform to vote on whether former U.S. President Donald Trump’s account should be reinstated on the platform. As the votes have started coming in, the early results are showing that roughly 60 per cent of users have voted yes.

“Vox Populi, Vox Dei,” Musk tweeted, a Latin phrase that roughly means “the voice of the people is the voice of God.” The poll was open for 24 hours.

On Friday, Musk said that a decision on bringing back Trump’s account was still pending. He added that Twitter has already reinstated some of the controversial accounts that were banned or suspended, including satirical website Babylon Bee and comedian Kathy Griffin. Elon Musk on Friday announced platform’s new content moderation policy and reinstated some accounts as the company faces an unprecedented wave of resignations after Musk issued an ultimatum to employees of Twitter to “commit to a hardcore work environment”.

“Negative/hate tweets will be max deboosted and demonetized, so no ads or other revenue to Twitter. You won’t find the tweet unless you specifically seek it out, which is no different from rest of Internet,” Musk said, adding that this is applicable only on the individual tweets and not the whole account.

Trump was banned permanently from Twitter in 2021 “due to the risk of further incitement of violence” after the attack on the United States Capitol Hill in January 2021. His account was first locked for 12 hours after he, through a series of tweets, called the people who stormed the US Capitol as “patriots”. After the restriction was removed, Trump had tweeted, “The 75,000,000 great American Patriots who voted for me, AMERICA FIRST, and MAKE AMERICA GREAT AGAIN, will have a GIANT VOICE long into the future. They will not be disrespected or treated unfairly in any way, shape or form!!!”