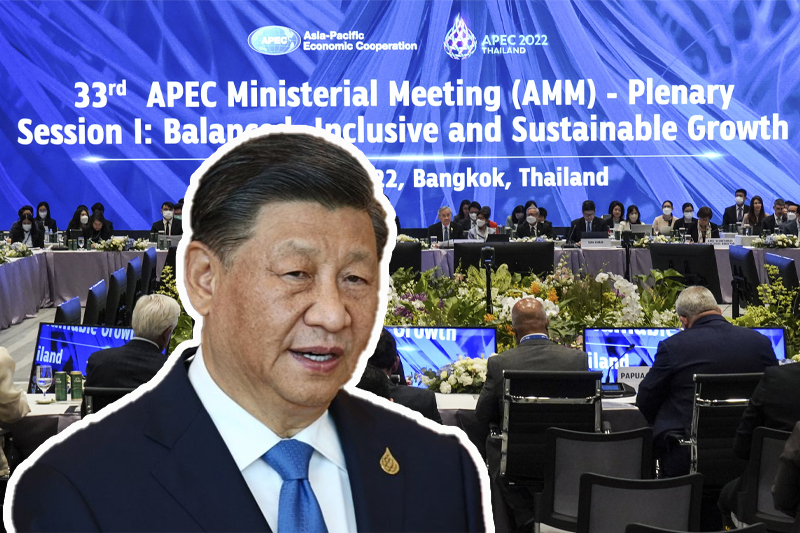 asia pacific region is no ones backyard xi jinping

Ahead of an APEC conference in Bangkok, Chinese President Xi Jinping warned against Cold War-era tensions in the region and emphasised the need to avoid hostilities. In a draught address made public before Friday’s opening day of the Asia-Pacific Economic Cooperation (APEC) leaders’ meeting in Bangkok, Xi declared his desire for China to be seen as a driver of regional cooperation while simultaneously appearing to take subtle shots at the United States, according to CNN.

Xi’s comments appeared to be a reference to US efforts with regional allies and partners to restrain what they perceive to be China’s increasing economic and military power that is used for coercion. In the statement, Xi emphasised that the Asia-Pacific region is “no one’s backyard” and should not serve as “an battlefield for major power contest.” He also condemned “any attempt to politicise and weaponize economic and trade interactions.”

The comments, which were made to business leaders gathered at the summit and did not specifically mention the US, were intended to them. He added, “No attempt to conduct a new cold war will ever be authorised by the people or by our times.” The removal of Hong Kong’s autonomy, intellectual property disputes, tariffs, Taiwan, and other issues have all contributed to the deterioration of ties between the world’s two largest economies in recent years.

As the main event began on Friday morning, Xi delivered a separate speech to the APEC leaders in a more subdued tone, urging for stability, peace, and the creation of a “more equitable international order.” In order to discuss the best ways to foster growth in the area, which lies on the fault lines of US-China competition and is coping with local tensions as well as the economic effects of Russia’s war in Ukraine, leaders and representatives from 21 economies from both sides of the Pacific are meeting in the Thai capital for the two-day summit, according to CNN.

When North Korea launched an intercontinental ballistic missile (ICBM) on Friday morning, it was the dictatorship of Kim Jong Un conducting its second weapons test in as many days amid escalating provocations from Pyongyang. In an unexpected media briefing, Japanese, South Korean, Australian, New Zealand, and Canadian officials joined US Vice President Kamala Harris outside the summit to denounce the launch. For their third consecutive meeting this week, world leaders have assembled in Thailand amid geopolitical unrest related to the conflict in Ukraine.

The APEC summit, which begins on Friday, is nominally charged with fostering regional economic cooperation, but it is anticipated that the aftermath of Russia’s war in Ukraine will take centre stage. Among the world leaders in attendance are French President Emmanuel Macron, Japanese Prime Minister Fumio Kishida, Australian Prime Minister Anthony Albanese, and Chinese President Xi Jinping. A number of high-profile talks are taking place outside of the forum, according to Al Jazeera, including a meeting between Xi and Kishida, whose relations have been strained by historical and security issues.

Jacinda Ardern, the prime minister of New Zealand, and Ferdinand Marcos Jr., the president of the Philippines, both announced they would meet Xi in person. Vice President Kamala Harris will stand in for US President Joe Biden, who will be in attendance at his granddaughter’s wedding, according to Al Jazeera. Vladimir Putin, the president of Russia, skipped this week’s G20 summit in Bali and will be represented by First Deputy Prime Minister Andrei Belousov in its place.